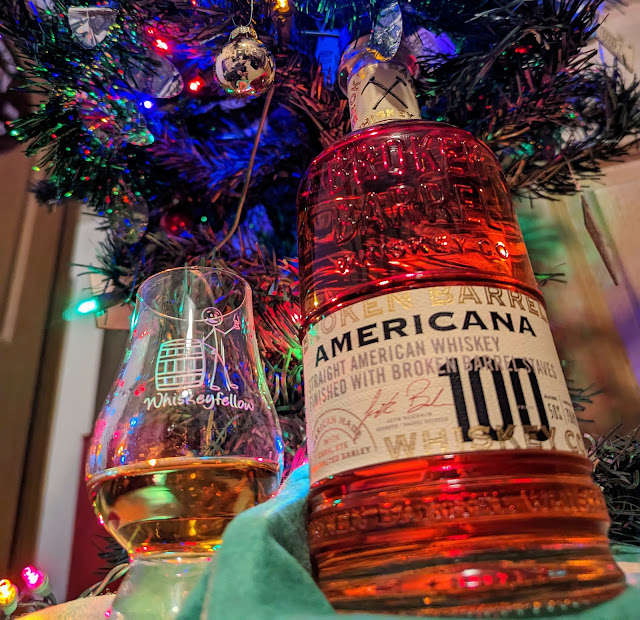 Seth Benhaim, the CEO and founder of Infuse Spirits, got his start early when, at only 25 years old, he became the youngest distiller to win Best in Show and Double Gold at the San Francisco World Spirits Competition. He wowed them with an infused vodka he created in his California garage. From there, he shifted his attention to doing something different with whiskey.

Broken Barrel Whiskey grew from that idea. Seth takes matured whiskey and then dumps it into stainless steel tanks. From there, he adds broken barrel staves that he calls an Oak Bill to mingle with the whiskey and take on additional characteristics. Instead of Seth charging an arm and leg for this artwork, his whiskeys are generally affordable. That’s something many of us appreciate these days.

Americana is a straight American whiskey distilled by MGP (now Ross & Squibb) from a mash of 80% corn, 14% rye, and 6% malted barley. The Oak Bill consists of 40% charred American oak, 40% toasted American oak, and 20% American apple brandy casks. Americana carries no age statement, but since it is labeled straight, rested at least two years before Seth tinkered with it. It weighs in at 50% ABV (100°).

Distribution is spread across 33 states and is also available online. You can expect to pay around $35.00 for a 750ml bottle.

Before I #DrinkCurious, I must thank Broken Barrel Whiskey for providing me with this sample in exchange for a no-strings-attached, honest review. Now let’s get to it!

Appearance: After I poured this whiskey into my Glencairn glass, I observed a bright golden liquid that created a thick rim. As I tilted my glass away, slow, sticky droplets eventually fell back into the pool.

Nose: Imagine, if you will, taking a stroll through an apple orchard, and you stumble upon a basket full of freshly-picked fruit. You bend down to lift the bounty and take in a deep breath. That’s most of the aroma, with a dash or two of vanilla and honey. When I drew the air into my mouth, the apple took on a cinnamon quality.

Palate:  I found the mouthfeel to be weighty yet oily. On the front, I tasted the apple, caramel, and vanilla. When it began to work its way down, cinnamon-spiced nuts transitioned to black pepper and French oak on the back.

Bottle, Bar, or Bust: Broken Barrel Americana 100 was designed to be different and achieved that goal. It is a total spice bomb, but that spice level depends entirely on how quickly you sip. If you keep the whiskey flowing, those spices lack time to build on your tongue, and you have an opportunity to find the other flavors. Whereas if you pause between as I usually do, that’s when the explosion happens, muting out everything else. And because of that, this earns my Bar rating.