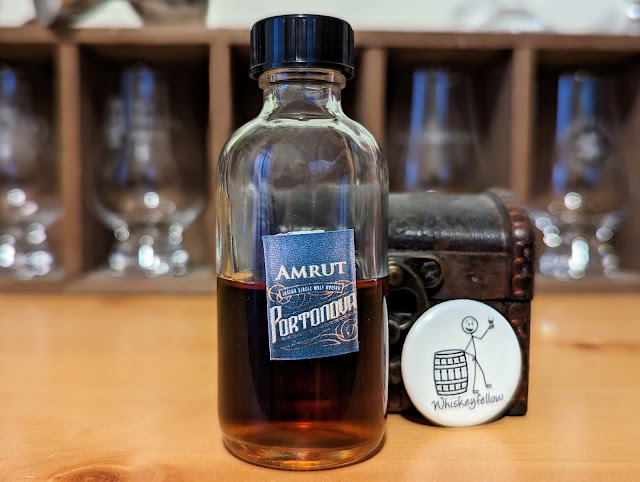 One of the fascinating realms of the Wonderful World of Whisky is Indian Single Malts. If you’ve never had one before and you’re a fan of Scotch whisky, you’re missing out. Indian Single Malts share characteristics of Speyside and Highland malts. What differentiates whiskies from these two nations is the use of six-row barley in India versus two-row nearly everywhere else and the significant climate differences. Things in Scotland tend to age slowly, whereas, in India, you can count on a multiple of three to four years for every one in Scotland. In India, the angels steal about 12% of the barrels yearly!

There are a handful of major distilleries in India, and the oldest one that produces single malt is Amrut. The name, translated from Sanskrit, means nectar of the gods. While Amrut started distilling in 1948, it didn't launch a single malt until 2004. It is also the first Indian distillery to win awards for its Indian Single Malts. Amrut’s distillery is located in Bengaluru, India.

Today I’m exploring Amrut Portonova. It is the same whisky as the Amrut Cask Strength Single Malt, distilled from 100% Indian six-row barley and aged in former Bourbon casks. Portonova carries no age statement, but it spent three additional years in tawny port pipes once it matured. It is non-chill filtered and naturally colored. It is packaged at 62.1% ABV (124.2°), and a 750ml bottle retails in the neighborhood of $135.00.

Portonova has been absent from the market for the last three years due to port pipe issues (I read into that supply challenges due to the pandemic). The 2022 version is the first reintroduction.

Amrut’s US importer is Glass Revolution Imports, and I’d like to thank them for providing me with a sample of Portonova in exchange for a no-strings-attached, honest review. Now it is time to #DrinkCurious and taste what this whisky is all about.

Appearance: Served neat in my Glencairn glass, Portonova was the color of dark chestnut. A husky rim released watery tears that fell back into the pool of liquid sunshine.

Nose: An enticing aroma of plum, caramel, toasted coconut, cherry, English toffee, and sandalwood wafted from the glass to my nostrils. When I pulled the air through my lips, plum and milk chocolate were easy to find.

Palate: I discovered a medium-weighted, silky texture as I took that first sip. Cherry, plum, and milk chocolate were on the front, while caramel, banana, and cinnamon powder graced the middle. The back tasted of black pepper, “meaty” oak, and clove.

Finish: Portonova possessed one of those very long-lasting finishes. It consisted of cherry, plum, cinnamon, chocolate, clove, and oak.

Bottle, Bar, or Bust: I found Portonova a real treat. There was no questioning that it was finished in tawny port pipes. But, if you didn’t know this was an Indian whisky, you might swear it came from the likes of The GlenDronach or BenRiach. For $135.00, this is something you won’t be unhappy buying, and it earns every bit of my Bottle rating. Cheers!