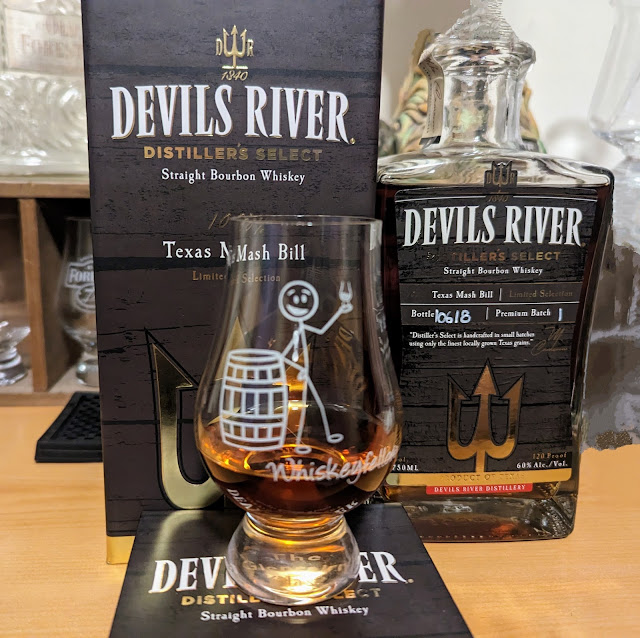 Devils River Distillery is out of San Antonio, Texas, and got my attention a year or so ago via its aggressive social media campaign. A friend who owns a liquor store down in Florida had an open bottle and gave me a taste. He was waiting for my reaction. Let’s just say neither of us was a fan.

I reviewed its Barrel Proof Bourbon late last year, and my assessment was similar. I figured I was done with the brand. However, after publishing that second review, Devils River Distillery reached out to me and asked if they could send me samples of their other whiskeys. Never one to turn down an opportunity for a review, I agreed. There were a handful of whiskeys in the package, one of which was the Agave Bourbon, which I found very tasty.

They sent another whiskey, the one I’m visiting today, which is its ultra-premium Distiller’s Select Straight Bourbon.

“Crafted from hand-selected bourbon barrels and made with 100% Texas grains, Devils River Distiller’s Select is a ‘grain to glass’ Texas Straight Bourbon. Distilled and aged in the hot Texas climate for over two years in a #3 charred American oak barrel, the Texas heat naturally accelerates the aging cycle as this whiskey expands deeper into the oak staves, giving our bourbon its rich amber color and complex flavor.” – Devils River Distillery

The grains come from a local cooperative of farmers. This Bourbon is bottled at 120°, which should be high enough to deliver some serious flavor, but not assault the palate. The proofing process included using spring water from the Devils River region. You can expect to pay about $59.99 for a 750ml package.

So, how’s this Bourbon taste? The only way to know for sure is to #DrinkCurious, but before I get there, I must thank Devils River for providing me with a sample of Premium Batch 1 in exchange for a no-strings-attached, honest review. Let’s get to that right now!

Appearance: A neat pour in my Glencairn glass revealed a Bourbon the color of burnt umber. At three years old, it initially surprised me until I reminded myself this was a Texas whiskey. A thinner rim formed these wild legs that went everywhere except up.

Nose: An aroma of molasses, apple, toasted oak, cinnamon, and dark chocolate flowed from the glass to my nostrils. The molasses was more pronounced when I pulled the air through my lips.

Palate: I encountered an extremely oily texture that lacked weight but managed to coat the entirety of my mouth. The front of my palate discovered brown sugar, vanilla, and cinnamon. That cinnamon pretty much morphed into rye spice on the middle, which was accompanied by caramel. The back was spicy with clove, freshly-cracked black pepper, and a healthy dose of charred oak.

Finish: The tip of my tongue sizzled like the Texas summer heat. Those spice notes got my attention, and refused to surrender. When it eventually fell off, I tasted barrel char and molasses.

Bottle, Bar, or Bust: Devils River Distiller’s Select drank at its published proof and offered a wallop of spices. But it did so almost politely. As it moved across my palate, it felt like everything was done by design. Tasted blind, I’d never guess this was only “more than” two years old. That’s the Texas climate for you. I enjoyed Distiller’s Select and am happy to crown it with my Bottle rating. Cheers!