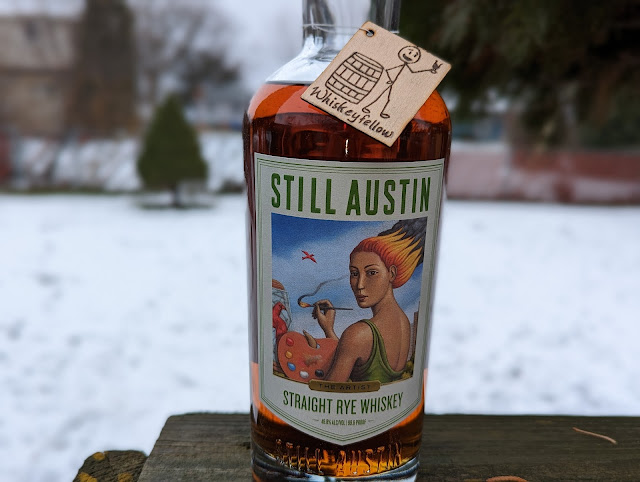 When you hear the name Nancy Fraley, it should immediately pique your curiosity. Nancy is known as “The Nose,” and she has a reputation for helping distilleries deliver the best out of what was American whiskeys (I have tasted and reviewed an Indian Single Malt she was involved with). Nancy doesn’t screw around. Nothing leaves with her name attached to it that doesn’t meet her strict standards.

Then, there’s Still Austin. Founded in 2015, it is a grain-to-glass distillery that carries out everything in-house, including milling, mashing, fermenting, distilling, and bottling. Its Head Distiller is John Shrepel, and the Master Distiller is Mike Delevante. Still Austin runs both a column and pot still, the former named Nancy (not after Fraley) and the latter The Queen.

In 2020, I reviewed The Musician, its introductory Texas Bourbon. Rather than recap it, here’s the rating I wrote:

If there was a Bourbon to change my mind about Texas-made stuff, The Musician accomplished the task.  I was surprised to find a complex nose and palate. I enjoyed the smoky finish.  I would love to find something to complain about, but even the price is right. So, yes, folks, you're getting a Bottle recommendation out of me on this Texas Bourbon.

As such, when Still Austin announced the release of its American Rye called The Artist, I became excited. Could the distillery follow through with another winner? Or, would this be a hot mess that so many Texas whiskeys will become?

The Artist is a straight Rye whiskey made with 100% Texas rye grains that, once distilled, rested in new, charred oak for at least two years. If you think that’s not a lot of time, it is enough to qualify for a straight designation, plus this is Texas. Whiskey ages faster than in many other parts of the country. My experience is two years is plenty.

The Artist is packaged at 49.8% ABV (99.6°) in 750ml bottles, and you can expect to pay about $50.00. It is currently available at the distillery in Austin, at its online store, or from ReserveBar. I would not be surprised to see this gain wider distribution just as The Musician enjoys.

The only way I will be able to determine if Still Austin can repeat its performance with this Rye is to #DrinkCurious. I thank Still Austin for providing me with a sample in exchange for my no-strings-attached, honest review. Let’s get to it.

Appearance: The Artist presented as a deep copper when poured neat in my Glencairn glass. A medium rim created thick, wavy legs that dropped back to the pool, leaving sticky droplets behind that defied gravity.

Nose: A sweet aroma of honey, date, plum, soft oak, Fig Newtons, and nutmeg wafted from the glass. Cherries exploded in my mouth when I drew the air past my lips.

Palate:  A creamy, heavy mouthfeel greeted my tongue and covered every crevice in my mouth. My initial impression included flavors of milk chocolate, caramel, and dried apricot. As it moved to the middle, I tasted brown sugar, orange peel, and cinnamon spice, while the back featured ginger, clove, and toasted oak.

Finish: There was a blended sweet and spicy finish of clove, ginger, nutmeg, toasted oak, brown sugar, and orange peel. The ginger and orange peel stuck around the longest, classifying this as a medium-long duration.

Bottle, Bar, or Bust: Here’s the thing about Nancy Fraley; her reputation is well-deserved. The Artist is an easy-sipping American Rye that offers plenty of character and can keep your attention without being overwhelming. If you enjoy soft, spicy Ryes, you will fall in love with this whiskey. Still Austin has done it again – this is a fantastic Texas whiskey that you can cherish, and it has earned every bit of my Bottle rating. Cheers!