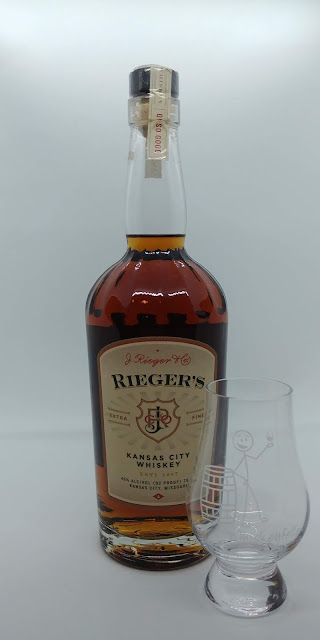 In this day and age in whiskey, it isn't overly difficult to stumble upon new brands. But, sometimes that "new" brand isn't so new after all. In the case of J. Rieger & Company, the brand has been around since 1887. At its heydey, J. Rieger offered more than 100 different spirits from its distillery in Kansas City, Missouri and was the largest mail-order whiskey house in the country. Unfortunately, when Prohibition reared its ugly head, J. Rieger was not one of the few, lucky survivors. It wasn't until 2014, under the guidance of Dave Pickerell, when the distillery reopened and launched their Kansas City Whiskey.

Rieger's Kansas City Whiskey is an interesting marriage of American Straight Rye, Light Corn Whiskey and Straight Bourbon. Then, that concoction is further blended with Dry Sack Especial Oloroso 15-Year Sherry. Rieger's carries no age statement, is bottled at 92°, and has a suggested retail of $43.00.

I'd like to thank J. Rieger & Company for providing me a sample of their whiskey for a no-strings-attached, honest review. And now, time to get down to business and #DrinkCurious.

In my Glencairn glass, the whiskey appears as a dark amber. It left a very thin rim on the wall and thin, fast legs that dropped back to the pool.

As a matter of practice, I normally leave my glass alone for ten or so minutes. Even before beginning the nosing, aromas of sherry filled the room. While that was obviously predominant, it wasn't overly difficult to pick out oak, maple syrup, and vanilla. When I inhaled through my mouth, very thick vanilla rolled over my palate.

The mouthfeel was thicker than I expected, perhaps from the sherry itself. And, that sherry was up front along with candied fruits, almost like a rich fruitcake. Mid-palate was a mixture of sweet corn, maple syrup, and toasted oak. On the back, it changed radically to very dark chocolate and rye spice. I don't recall too many whiskeys that transform from very sweet to spicy the way Rieger's did.

A long, spicy finish from the Rye mixed with dry oak and mingled with the familiar sweetness from the sherry.

Bottle, Bar or Bust:  Like a few other Pickerell projects (notably, Blackened), there is a lot going on with Rieger's and it is a challenge for the palate to nail down flavors. Considering the makeup of the blend, that's understandable. But, it also makes the whiskey interesting in a good way and I'm always game for something that isn't just another "me too" whiskey. When you further consider the relative affordability, Rieger's earns the Bottle rating and I'm happy to have it in my library. Cheers!

Posted by Whiskeyfellow at 6:18 PM