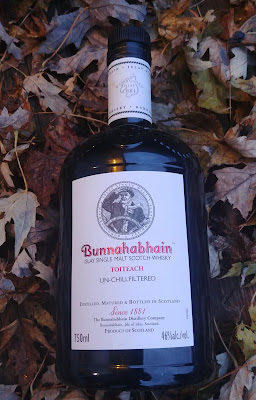 When you think Islay you think about peated whisky. After all, that's what this Scottish island is known for.  Caol Ila, Ardbeg, Lagavulin, Laphroaig, Bowmore, Bruichladdich, and Kilchoman, are all known for their peated, smoky (sometimes ash) flavors. And then, there's Bunnahabhain, who tends to kick Islay tradition and is recognized for distilling unpeated whiskies. This isn't to say Bunnahabhain doesn't make peated whisky, just they're not known for it.  Bunnahabhain was founded in 1881 in the village of Bunnahabhain, and this village caters almost exclusively to the distillery. It is in the most remote part of Islay.

Time for a segue.  If you're new to (especially) Scotch, you may be unfamiliar with the term peat. Peat is peat moss, which grows in bogs around the world. Each bog is unique in its characteristics and offers a variety of flavors. Distilleries have to malt their grains, and that's done primarily on what's called a malting floor. The grains are soaked in water so they begin to germinate, and once that happens, the process has to be stopped, and the way to stop it quickly is to apply heat. Heating can be done quickly and efficiently by burning peat. The peat, in turn, naturally adds a smoky flavor to the barley itself.

Getting back on track, I've enjoyed Bunnahabhain for several years. Admittedly, I've never tried one of their peated whiskies. But that changed last night with Toiteach (pronounced Toch Chah and translated to English means smoky). This is a non-chill-filtered single malt Scotch, carries no age statement and is bottled at 46% ABV. Retail on this is about $69.99, which is quite affordable in the wide world of Scotch.

How does Toiteach taste, and is it worth tracking down?  Time to #DrinkCurious and find out.

In my Glencairn glass, it presented as a pond of light gold, leaving a thin rim on the wall that created medium legs that ran back to the liquid sunshine.

As I let the whisky breathe, I couldn't help but notice how the aroma of peat filled the room. My glass was nowhere near my face but it was absolutely attention-getting. Once I brought the glass up for the nosing experience and got beyond the peat, it was a fragrance of both orchard and dried fruits, making an unusual combination.  When I inhaled through my lips, I tasted vanilla and toffee.

When I let this Scotch hit my tongue, it was light and airy. At the front, Toiteach was sweet, which is typical of Bunnahabhain. Mid-palate was when much of the flavor was exposed.  It started off smoky, thanks to the peat, then iodine crept in, followed by peach and plum, again giving that very different combination.  On the back, it was a lovely mix of chocolate and black pepper.

The finish was long-lasting and very complex with smoke, seaweed, charred oak, black pepper and a hint of cocoa. I never really wanted it to end, and when it did, I was quick to take another sip.

Bottle, Bar or Bust:  I enjoy both peated and unpeated Scotches, so this Bunnahabhain was a big curiosity for me.  As it turned out, I've fallen totally in love with Toiteach. It is very creative, full of flavor without being overly peated and surprisingly well-balanced considering everything that was going on, especially on the finish. And then there's that affordability factor. If you do the math, that combination makes this a no-brainer Bottle.  Cheers!
Posted by Whiskeyfellow at 2:35 PM