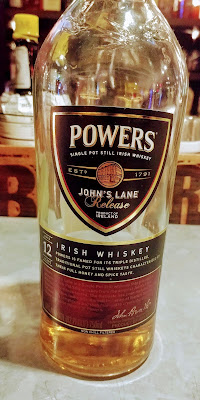 Usually, I don't get caught with my pants down. Last month, I was in Colorado visiting my parents. I brought all of my "equipment" with me on the trip, including a Glencairn glass, notebook, pen, etc. in the event that I might stumble on something interesting. We went to dinner at one of the dining halls in their retirement community and had to wait in the gathering area while waiting for an open table.  My folks ran into some friends, everyone got to talking, we decided to all have dinner together and, oh yeah, while we're waiting for a table, who would like to have a drink?

The last time I was there, the bar had nothing overly exciting. But, I got up and wandered over to see what options existed and, lo and behold, there was something I'd never had:  Powers John's Lane. What else didn't I have? My notebook or pen.

In Madison, there exists a pretty awesome whiskey bar called Cask & Ale, located on State Street. Every time I mention how many whiskeys they have on the wall, my buddy Ken (one of the owners) corrects me. I think it is a running joke at this point. Anyway, last time I asked, they had 750. To wrap things up, I visited Cask & Ale on Black Friday with the expressed purpose of gathering some tasting notes on Powers John's Lane.

James Powers founded his distillery in 1791. What many people don't know is his was the very first Irish whiskey to ever be bottled. It remained a functional distillery until 1966 when, after a steep decline and decimation of the Irish whiskey industry, Irish Distillers Ltd. (the controlling entity of the remaining distillers), shut down every distillery and transferred all production to their brand new Midleton Distillery.

The official name of the original distillery was Powers John's Lane. And, while Powers has continued to be available, they have a special release named after that distillery. It is a mash of 100% malted barley, non-chill-filtered single pot still whiskey aged 12 years mostly in ex-Bourbon barrels and a small amount of ex-Sherry casks before being bottled at 46% ABV.  Retail is approximately $72.99.

In my Glencairn glass, Powers John's Lane appeared as a deep, rich gold. It left a medium-thick rim on the glass and created fast legs to drop back in the pool.

The mouthfeel was light and coated my entire palate. At the front, it was a mouthful of chocolate. As it transitioned to the middle, caramel, apple, pear, and apricot took over. It was as if there was an entire orchard in my mouth! Then, on the back, sweet vanilla started to close up shop.

But then, a creamy, long finish of honey and oak remained, adding a huge smile to my face.

Bottle, Bar or Bust:  The first time I tried Powers John's Lane I was impressed. The second time I tried it, it was better than I remembered. There are several excellent Irish whiskeys on the market today, and Powers John's Lane is one of those. When it comes to availability and affordability, Power's John's Lane becomes a shining star in that galaxy. It is a definite Bottle recommendation. Cheers!

Posted by Whiskeyfellow at 6:37 AM