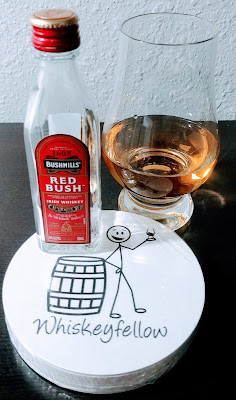 Did you know that Bushmills is the oldest licensed distillery in the world? That was news to me! But, Old Bushmills Distillery has been distilling since 1608. It hasn't been a continuous run - it was shuttered and reopened a few times, and back in 1885 the distillery was pretty much destroyed by fire. But, they rebuilt and resumed operations and even survived Prohibition, a feat most other Irish distilleries failed to overcome.

Bushmills has also changed hands several times. Founded by an Irish adventurer named Thomas Phillips, it didn't officially become Bushmills until 1784 when it was purchased by Hugh Anderson. It changed hands a few times, and then, in 1972, it was taken over by Irish Distillers, the holding company that controlled all Irish whiskey production. Then, in 1988, Pernod-Ricard took possession, who sold it to Diageo in 2005, who traded it off to Jose Cuervo, its current owner, in 2014.

Today I'm reviewing Bushmills Red Bush. Red Bush is a blended whiskey, meaning it is a blend of single malt and single grain whiskeys. Single malt refers to malt taken from a single distillery. Single grain means the same, except the grain is something other than malted barley. Typical of Irish whiskey, Bushmills triple-distills in a pot still. In the case of Red Bush, it is aged for at least three years in ex-Bourbon barrels. Bottled at 40% ABV (80°), retail is about $24.00 and it is very easy to find at liquor stores everywhere.

How does this very commercial Irish whiskey fare?  The only way to answer that is to #DrinkCurious, so here we go:

In my Glencairn glass, Red Bush appears as the color of golden straw.  It left a thin rim that created both very wavy legs and fat, slow droplets that worked back to the pool of liquid sunshine.

The sweet nose consisted of apricot and honey. It continued with pear before the sweetness tamed and became a mix of spice and oak. When I inhaled through my mouth, it was all apple.

My initial sip was a creamy mouthfeel with medium weight.  Additional attempts didn't change things. At the front, honey and apricot dominated, just like on the nose. In the middle, something interesting happened. It was originally just vanilla cream.  But, after a few subsequent sips, a dark chocolate bomb took over and even overwhelmed the vanilla. On the back, I found cocoa and black pepper.

It ended with a light, peppery finish mixed with dry oak. Medium to long in length, it provided no real warmth but was enjoyable.

Bottle, Bar or Bust:  Red Bush is a bottom shelf Irish whiskey. It is very easy on the wallet and not something that would otherwise garner attention. And, that's a shame (or perhaps not) because I found it enjoyable and it even brought a smile to my face. Two things happen here: Not only does it get my coveted Bottle rating, but it also snags my #RespectTheBottomShelf label.  Cheers!
Posted by Whiskeyfellow at 6:34 AM