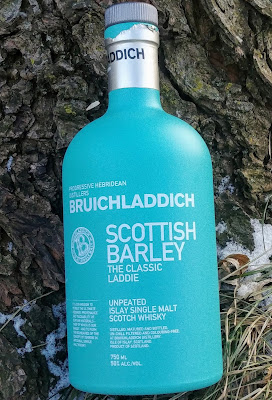 Located on the southwestern tip of Islay, the Bruichladdich Distillery is one of only nine working distilleries in this Scottish region. It was originally opened in 1881, but after several different owners, it was eventually shut down in 1994. Then, in 2000, it was resurrected and today, it creates three distinct brands:  Bruichladdich, Port Charlotte, and Octomore. The first is unpeated, the second peated, and the third heavily-peated.
Today I'm reviewing Bruichladdich's The Classic Laddie which you can tell by the brand is an unpeated Scotch. It comes in a brilliant blue bottle that is easily recognizable on the shelf. Unlike many Scotches, this one's bottled at 50% ABV (100°).  Bruichladdich uses no artificial colors and is un-chilled filtered. Suggested retail on it is about $55.99.
Bruichladdich states they want to push the boundaries of the concept of terroir in an artisanal, single malt whiskey. If you're unfamiliar with the term terroir, basically it means making the most of the immediate local environment, including the climate, the soil, and the landscape. Bruichladdich is big into experimentation, and making The Classic Laddie is one huge experiment.
If you visit the Bruichladdich website for The Classic Laddie, you can punch in your 5-digit batch code and they'll tell you exactly what made up that particular batch.  In the case of mine, Batch 14/009, it came from 67 casks, five vintages (2003 through 2007), two barley types (Scottish Mainland and Scottish Mainland Organic), and nine cask types:
Well, that's a lot of wood and quite a bit of overload, wouldn't you say? I do appreciate the transparency, but as I always say, what's important is how it tastes, so let's get to that already.
Appearance:  In my Glencairn glass, The Classic Laddie appeared as a dull, brassy gold. It left a very thin rim on my glass that, after a few moments, created slow, thin legs that crawled back to the pool of whisky.
Nose:  Almost immediately, aromas of chocolate and citrus filled my nostrils. I also picked up the scent of honey, and along with that, an almost meadow of different flowers.  I'm not a florist nor do I play one on television, so I won't attempt to tell you what variations there were, just that they were numerous. When I inhaled through my lips, iodine and seaweed were prevalent, something very common for Islay whiskies.
Palate:  The first run across my palate was light, almost too light. A second sip was even lighter in my mouth, I had to work at getting it to coat the inside of my mouth. But the weird thing is that it was also creamy. Up at the front, I tasted a mixture of both dry and wet oak. I know, that sounds strange. It was also very sweet. The sweetness moved mid-palate where fruits, such as apples and grapes took over. There was also sugary honey which moved to the back, where it ended with nuts consisting of cashew, almond, and pecan. To say this was complex would be an understatement:  every time I took another sip I found something new and different.
Finish:  A very long finish of white pepper, clove, and honey ran for several minutes. It ended with an astringent (band-aid) taste that some Scotch fans love, yet makes others cringe.
Bottle, Bar or Bust:  A friend of mine gifted me this bottle because he simply hated it. He said this had been sitting on his bar for several years and he's been trying and trying not to do a drain pour. He asked me if I wanted the bottle, and after taking a quick taste, I grabbed it. After taking the time to do a comprehensive review, I find myself disagreeing with my friend. This is a pretty damned delicious, very complex Scotch. If I were to knock something, I'd prefer less of the astringent at the end, but that's something that I don't find off-putting. When you take into consideration how affordable this Scotch is, I'm tossing a Bottle rating at it. Cheers!
BONUS:  I did a live tasting of this whisky on The Glass Less Traveled last night. If you'd like to watch it, the link is here.

Posted by Whiskeyfellow at 8:07 PM