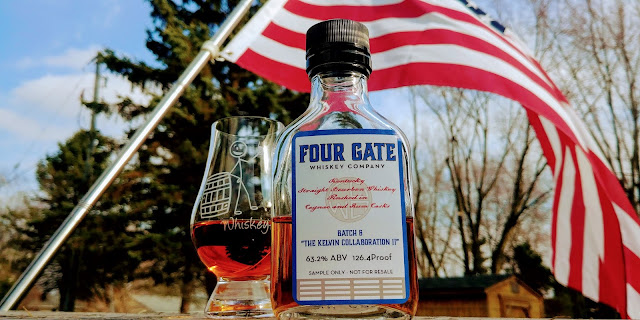 When Bourbon or Rye approaches $200, it better be damned good. For that matter, any whiskey at that price better blow my mind.

Today I'm reviewing The Kelvin Collaboration II from Four Gate Whiskey Company.  Perhaps you're wondering who the heck Four Gate is and what kind of cojones they have to charge $200 for something they've not even distilled themselves. Let's get this out of the way.  Four Gate is a blender. They source great whiskeys from wherever and create something special - or at least, that's the theory.

Blending is an art form.  Yeah, I know, blended whiskeys suck, right? Not all of them, not even close! With regard to American whiskeys, a blend can mean several things. But, I'm betting some of your favorite Bourbons and Ryes are blended. Unless it says, Single Barrel on the label, guess what? Its a blend - a blend of several barrels, a/k/a Small Batch.


If you've ever done a barrel pick, you know that no two barrels are the same.  You can have the same distillate, distilled on the same day, placed in two identical barrels from the same cooperage, coopered immediately after one another, then placed in the same warehouse, set next to each other on the same rick, aged for the exact same amount of time under the exact same conditions, and they can have amazing variances.


To get consistency, distilleries blend a bunch of different barrels together. That's a small batch.


But, let's get beyond the small batch. The true Master Blender is an artist with a target in mind, and the puzzle is, How do I get there?  The answer to that is, you take different barrels, different whiskeys, different grains, malts, or whatever, and blend them together to reach your goal. Sure, you could start randomly dumping this into that and hoping for the best - and that's an excellent way to ruin potentially good whiskey. Rather, it is an artistic science. I have a ton of respect for good Master Blenders, no matter what type of whiskey they work with.

Now we come back full-circle to Four Gate, which has been blending since 2018.  Bill Straub and Bob D'Antoni have been working hand-in-hand with the folks at Kelvin Cooperage in Louisville. Bill and Bob are Louisville natives and really know their whiskey. Kelvin, of course, is one of the nation's premiere cooperages with a long, rich heritage going back to Scotland. They definitely comprehend wood. And, all of that requires some decent knowledge of science.

It starts with 12-year Kentucky Straight Bourbon.  While the distiller is undisclosed, I know it is a mash of 74% corn, 18% rye, and 8% malted barley. It leads me to assume that's 1792 Barton since that's their standard recipe. Four Gate then finishes that Bourbon in ex-Cognac and ex-dark rum casks. The yield is only 2,474 bottles, and it weighs in at a hefty 126.4°. Distribution is limited to Kentucky, Tennessee and online at Seelbach's.

So, is it any good?  The only way to find out for sure is to #DrinkCurious. Before I start, I'd like to thank Four Gate for sending me a sample in exchange for a no-strings-attached, honest review.

In my trusty Glencairn glass, Batch 6 has the color of a deep, dark, orange-amber. It left an almost microscopic rim that generated thick, speedy legs to drop back to the pool of liquid sunshine.

As I let the Bourbon breathe, aromas of rich, sweet, dark fruit filled the air. Once I brought the glass to my face, there was a definitive coupling of molasses and stone fruit. As I continued to explore, I discovered cinnamon and oak.  When I inhaled through my lips, it was all brown sugar.

The mouthfeel was thick and viscous, giving it a luxurious quality. It wasn't overly warm despite the significant proof. At the front, I experienced sweet molasses and a dominating oak. Then, at mid-palate, it was like I was in an orchard of black grapes and sweet apricots. Before it worked its way to the back, I tasted thick caramel that seemed like it stuck. On the back, it became a rather complex marriage of dark chocolate, old leather, dry oak, clove, and tobacco.

The medium-to-long finish consisted of caramel, dry oak, and clove. It was interesting to encounter all the complicated notes on the back and have them funnel into three precise flavors.  And then, something interesting happened. Remember how I started off saying that despite the proof, it wasn't overwhelming?  Well, it may not have been at first, but my hard palate absolutely tingled by the time I figured things out.

Bottle, Bar or Bust:  Asking $200 is asking a lot of me. I felt very weird last year, naming a $150 whiskey my Bourbon of the Year, but I did.  When you consider BTAC, Four Roses Small Batch LE, Elijah Craig Barrel Proof, and some other heavy-hitters at much less (at least at retail), that's challenging. However, I believe Four Gate knocked this one out of the park. I really, really enjoyed this pour. I loved the nose, how crazy the palate got, and then how all the loose ends were tied up in the finish. Yeah, it is a lot of money. In this case, I believe it is worth the price and snags my coveted Bottle rating.  Cheers!

Bottle = Buy it
Bar = Try it first
Bust = Leave it
Posted by Whiskeyfellow at 6:28 AM