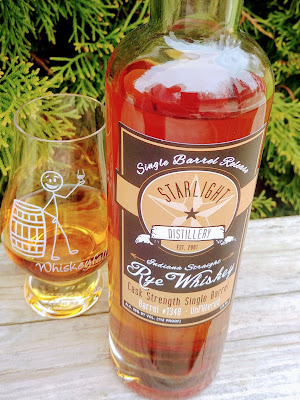 Back in October, I stopped off in Borden, Indiana, to visit Starlight Distillery. I had tasted its Single Barrel Old Rickhouse Rye and wanted to learn more about this non-MGP distillery. When I was there, I tasted a variety of spirits and wines and walked away with a bottle of Cask Strength Single Barrel Indiana Straight Rye.

Everything at Starlight is done on-premises. Starlight uses a mash of 85% unmalted and 15% malted rye. They ferment using a sweet mash, meaning the yeast starts fresh every time, without holding back something from the previous batch. It provides less consistency batch-to-batch than would a sour mash. Fermentation takes between five and six days.

Starlight uses two stills:  one is a copper 80-gallon pot still from Kothe, and the other is a copper 500-gallon pot still from Vendome. Once distilled, Starlight fills 53-gallon, charred oak barrels and then lets it age in their rackhouse. In the case of Barrel 1348, which I am reviewing today, that resting period took four years. Once dumped, the whiskey does not go through any filtration process. It comes out of the barrel at 112°.  Sold in 375ml bottles, retail is $25.99 at the gift shop. At the time of this review, Barrel 1348 is still available on Starlight's website.

So, how does this Indiana Straight Rye hold up? The only way to know for sure is to #DrinkCurious.

Appearance:  In my Glencairn glass, Barrel 1348 appears as a deep chestnut color. It left a thin rim that generated fat, wavy legs to drop back to the pool.

Nose:  This whiskey not overly aromatic, meaning that I didn't smell much while I was allowing it to rest. When I brought my glass to my face, I discovered a floral quality. That's common with American Rye. I also found light oak. But, before that ended, a different fruitiness tickled my nostrils, which I found to be date and fig. When I inhaled through my parted lips, the date became more obvious.

Palate:  A thin and oily mouthfeel greeted the inside of my mouth. It was easy to move it around via the Kentucky chew. I almost forgot it was barrel proof because there was no heat whatsoever with it.  Flavors of milk-chocolate covered raisins and fig were at the front. As the Rye worked its way across my palate, toasted oak and almond were in the middle. Then, on the back, that toasted oak turned dry and was joined by a solid rye spice.

Finish:  The finish was long, and frankly, much longer than I expected. It seemed to fall off quickly and then had a resurgence. Subsequent sips gave me the same experience. I could not get it to level out no matter how many times I tried.  There was also quite a bit going on. It started off minty, then fainted. Then, a pop of clove was joined with dry leather. Finally, it became sweet with raisin.

Bottle, Bar, or Bust:  2020 has been a very strange year for everyone around the world. We've had this horrific coronavirus that has, at the least, been disrupting everyone's lives and, unfortunately, stolen others. But it has also unusually been a very good year (at least for me) whiskey-wise. I've handed out several Bar ratings, only a few Busts, and many Bottle recommendations. I was impressed with how easy this one went down despite the proof. It had a curious nose, a semi-complicated palate, and an interesting finish. Considering all of that with the easy-on-the-wallet price tag, I'm sold. And, I believe you will be, too. This one is a definite Bottle recommendation. Cheers!

Bottle = Buy it
Bar = Try it first
Bust = Leave it
Posted by Whiskeyfellow at 5:38 PM