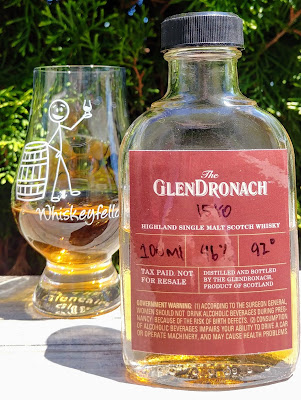 Back in 1823, the British Parliament passed the Excise Act, which was enacted to collect taxes on distillers. It involved not only providing a license to distill, but also to tax any distillery on a per-gallon basis. The purpose was to address smuggling in the Scottish Highlands. This smuggling was somewhat covert, but acceptable because wealthy landowners knew that distilling was the only way their tenants could pay rent and, well, they wanted their rent money. The Excise Act did what it was supposed to, and the Scotch distilling industry began to thrive.
In 1826, The GlenDronach Distillery was founded, and it was only the second such distillery granted a license.  Like many Scotch distilleries, it has changed hands several times and been shuttered, only to be reopened later. In the case of The GlenDronach, this Highlands distillery's hiatus was from 1996 to 2001 and reopened by Allied Distillers.  It has been owned by William Grant, Teacher's, Chivas Brothers, BenRiach, and now is owned by Brown-Forman.
Today I'm reviewing The GlenDronach Revival 15-Year Single Malt. The term Revival is due to the fact the 15-year was discontinued for a few years before being resurrected.  Being a single malt, the mash is 100% malted barley from a single distillery. After distillation, it was placed in ex-Sherry casks, notably Pedro Ximénez and Oloroso from Andalucia. It is non-chill filtered and, shockingly, has no added caramel color. It is bottled at 46% ABV (92°) and suggested retail is about $84.00.
I'd like to thank Brown-Forman for providing me a sample of this Scotch in exchange for a no-strings-attached, honest review. And, with that, let's #DrinkCurious.
Appearance:  In my Glencairn glass, The GlenDronanch appears as a very dark bronze. As I said above, I was shocked this was its natural color. It left a medium rim but generated fat, slow legs to drop back to the pool.
Nose:  This was very fragrant from the start. If you've heard the term sherry bomb before, you know what I'm about to describe. It started with dark cherries and candied fruit. That moved to nuts, chocolate, malt, and vanilla. When I inhaled through my lips, I was blown away by the raspberry that raced through my mouth.
Palate:  The mouthfeel was strangely thin. Perhaps it was just the color that prepared me for something thick and heavy. Plum, apricot, cherry, and honey started things off at the front. As it moved across my palate, midway I found cocoa and molasses.  Then, on the back, I tasted malt, almond, and an herbal quality.
Finish:  Once it started, it never wanted to give up the ghost. It started with heavy, dark chocolate. That was joined by oak and black pepper. Before it finally ended, there was a faint suggestion of mint.
Bottle, Bar, or Bust:  The GlenDronach 15 is an unpeated malt. That means if smoke and ash aren't in your wheelhouse, you don't have to worry. At the same time, if you don't appreciate an astringent (medicinal or band-aid) quality, that's not here, either. The nose and palate were wonderfully complex and I had a lot of fun trying to sort things out. The finish kept my interest sip to sip.
Not only is this a Scotch that can appeal to a wide swath of whiskey drinkers, but $84.00 this is what I would describe as at the higher end of mid-priced Scotch. Finally, I'm going to let you know that this may be the best Scotch I've had so far this year (and I've had a lot). My rating should be obvious - buy a Bottle.  Cheers!

My Simple, Easy to Understand Rating System:
Posted by Whiskeyfellow at 6:31 AM