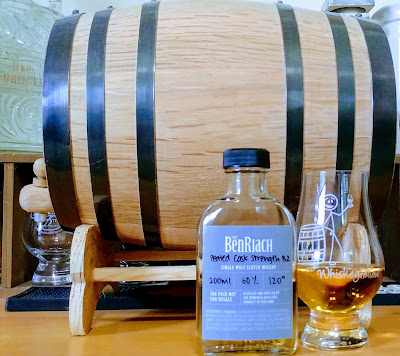 Cask-strength whiskey is nothing new, but when you find it in a Scotch, well, that has the potential to be something special. Today I'm reviewing BenRiach Peated Cask Strength Single Malt Scotch - Batch 2.  Whew! That's a mouthful, isn't it?  Well, wait for the review.
Founded in 1898 by John Duff, the initial run for BenRiach was very short-lived - only two years. Then, it was shuttered due to the Pattison Crash. If you've not heard of it, the short story is it took out many distilleries. The longer story is it was caused by independent bottlers gaming the system, so much so that when the biggest firm, Pattison, Edler & Company went under, they took out nearly a dozen others in the process. That cascaded and led to the bankruptcies of the distilleries. It was not a good time to be in the whiskey business.
It was then reopened in 1965 by The Glenlivet. During that 65-year hiatus, the building was never torn down because the distillery next door, Longmorn, used BenRiach's malting floor and some other equipment while it was mothballed. Then, Seagrams purchased The Glenlivet in 1978, which was acquired by Pernod-Ricard in 2001.
And, then, the distillery was shuttered again from 2002 to 2004.  It was purchased by Brown-Forman, which owns BenRiach to this day. The Master Blender, Rachel Barrie, runs things "unconventionally Speyside."

"As progressive Speyside whisky distillers, BenRiach crafts unpeated, peated and triple distilled malt whisky and holds some of the most experimental casks in Speyside. Small wonder the distillery team have nicknamed the distillery ‘The Lab’."

Now that the backstory is done, let's get back to this particular whisky.  Being a single-malt Scotch, the mash is 100% malted barley. Once distilled, it is triple cask matured using ex-Bourbon barrels, ex-Oloroso sherry casks, and virgin oak hogshead.   In the case of Batch 2, Barrie chose casks from 2006, 2007, and 2008. As this was bottled in 2018, the math tells us she used 9-, 10-, and 11-year old whiskies. Non-chill filtered and naturally-colored, this 60% ABV Scotch retails for $99.99.
I'd like to thank BenRiach for sending me a sample of this Scotch in exchange for a no-strings-attached, honest review. Time to #DrinkCurious.
Appearance:  In my Glencairn glass, Batch 2 appeared as golden straw.  It created a very fat rim that formed fat, sticky droplets. Those eventually led to slow, thick legs to drop back to the pool of liquid sunshine.
Nose:  Let's get something out of the way. Peated whiskies smell of peat. The trick is to get past that. Just as there is a thing called palate shock, there is an olfactory shock as well. You need to let your senses get used to the peat.  The peat itself was married with brine, and underneath those were rich vanilla, dark fruit, oak, fresh coconut, honey, and apples. When I inhaled through my parted lips, I found orange zest.
Palate:  The first sip was obviously peated. But I'll be a monkey's uncle if this is 120°.  I'm not doubting it, rather, there was nothing in terms of heat in my mouth or throat. It had a very creamy mouthfeel. It was just lovely.
Once the palate shock ended, the front was a heavy punch of thick vanilla. That was combined with toasted oak and a Heath bar. Mid-palate, it changed to roasted almonds and brown sugar, plus a blend of lime and tangerine. Yeah, I know, that's  a very different flavor profile. The complexity continued on the back with caramel, a Mounds bar, and Red Hots.
Finish:  Medium-to-long, the finish consisted of dried oak, cinnamon sticks, and ginger beer.
Bottle, Bar, or Bust:  There were a lot of very fun and interesting flavors involved. I don't think I've ever used three candy descriptors before, but there was no other way to describe things. I loved the variation and creativity with this whisky. A C-note for barrel-proof Scotch is honestly a bargain, and this is delicious to boot.
If peat is your thing, you're going to love this.  It isn't heavily-peated like Octomore or Ardbeg, this one is more along the lines of Talisker Storm. For you (and me), I give this a no-brainer Bottle rating. If you're new to peat, you may want to try this one first. Peat isn't for everyone. Despite its price tag, this would be a very nice introduction to peated whisky.  Cheers! 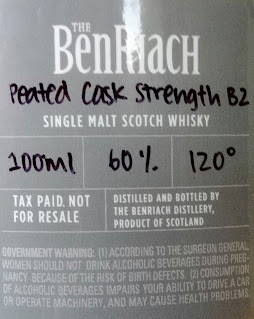 My Simple, Easy to Understand Rating System
Posted by Whiskeyfellow at 7:06 AM