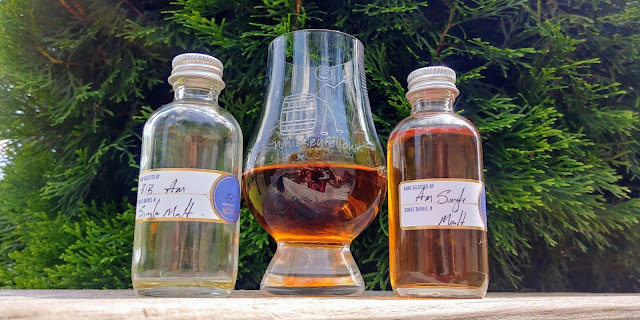 I've been having a lot of fun with American Malts lately. For a category I initially disliked, I've done a 180-degree turn and I'm at the point where I seek these out.  When Boulder Spirits sent me samples of both their standard American Single Malt and their new, Bottled-in-Bond Single Malt whiskeys, I raised an eyebrow. I mean, yeah, American Single Malt, but a Bottled-in-Bond one to boot?
Bottled-in-Bond is my very favorite category of American whiskey. And, yes, it is uniquely American. To qualify as Bottled-in-Bond (or Bonded), it must be a product of the United States, it must be distilled by a single distiller at a single distillery during a single distilling season (which runs January through June or July through December), it must be aged at least four years in a bonded warehouse, and must be bottled at only 100°, no more, no less.
I've had Bottled-in-Bond Bourbons, Ryes, a Brandy, and even an American Malt, but I don't recall ever stumbling upon a Single Malt.  I was very happy to have a standard release to try side-by-side to see how much the Bottled-in-Bond requirements would change the whiskey.
Today I'm going to review these as they were sent:  side-by-side. I'll start with the standard expression and then the Bonded.  If you'd like a bit of background on Boulder Spirits, I'll invite you to read my review of its Bottled-in-Bond Bourbon.  But, for background on the American Single Malt expressions, Boulder Spirits sourced its barley from the United Kingdom, and it was malted at Munton's Malt, also located in the UK. Once it was shipped to Boulder, the milling, mashing, fermentation, distillation, and aging were all done in-house.  The fermentation period was 36-hours, it was then twice-distilled in its copper pot stills and then aged in virgin #3-charred oak barrels in an uncontrolled environment. Proofing utilized locally-sourced Eldorado Springs water.
Before I get started, I'd like to thank Boulder Spirits for these samples in exchange for a no-strings-attached, honest review.
American Single Malt - Standard Expression
The standard expression has aged a minimum of three years and is bottled at 92°.  The suggested retail is $53.99.
Appearance:  This whiskey presented as a bright orange-amber in my Glencairn glass. It created a thin rim and fast, watery legs to drop back to the pool.
Nose:  Aromas of malt, apricot, and honey started things off.  It was both sweet and inviting. Milk chocolate then followed, and then, finally, plum.  As I inhaled through my lips, thick, heavy honey rolled over my tongue.
Palate:  The mouthfeel had a medium-body and then became creamy, although it required effort to have it coat my palate.  A sweet blend of apple, pear, and vanilla introduced itself. Come mid-palate, things changed to raspberry, plum, honey, and crème brûlée.  Then, on the back, the spices took the stage with nutmeg, allspice, and white pepper.
Finish:  A medium-length finish started with toasted oak, then moved to cinnamon, and, finally, cocoa powder.
Bottle, Bar, or Bust:  I enjoyed this Single Malt. It was everything you'd expect in an American Single Malt - it was fruity, and it had both sweetness and spiciness. There was nothing off-putting and while the malt notes were prevalent, they weren't overpowering.  The price is about average for American Single Malt, perhaps tapping a bit on the ceiling.  I'd buy this for my whiskey library, and as such, it takes a Bottle rating.
American Single Malt - Bottled-in-Bond Expression
The Bottled-in-Bond version suggests four years but according to Boulder Spirits, it is closer to five. It is, of course, bottled at 100°. The retail price is $69.99.
Appearance:  In my Glencairn glass, this whiskey offered a deep, caramel color.  It left a medium rim that fostered slow, thin legs to drop back to the pool.
Nose:  Malt was the first aroma to hit my nostrils. It was joined by freshly-cut grass and brown sugar. What followed was orange, pear, and oak.  When I pulled the vapor through my mouth, there was a blending of honey and malt.
Palate:  The mouthfeel was thick and full-bodied. It also tingled the heck out of my hard palate. On the front were spicy ginger beer and rich vanilla. Yes, that combination seems strange, but for some reason, it worked. As it worked its way to the middle, I got a punch of baked apples and thick cinnamon. When it moved to the back, sweet berries and clove took over.
Finish:  A very long, very strong finish of barrel char, clove, coffee, and berry closed out the show.
Bottle, Bar, or Bust:  I seemed like a game of tug-of-war was taking place between sweet and spicy. My palate tingled as I sipped this and 100° is usually no big deal to my mouth. The mouthfeel was almost dense and I felt like I was chewing through the cinnamon apple on the palate. The price is on the high side, yet at the same time, less expensive than other limited-release American malts I've tried. This one earns my Bottle rating.
Epilogue - My Choice:  Both of these malts were delicious, and shockingly, much different from one another. The standard expression had the benefit of allowing blending from various distilling seasons, was at least a year younger and proofed down eight points, which is significant.  It was sweet and sultry. The Bonded version was an attention-getter. It drank higher than its proof and was spicy and fruity.  It was also more intriguing than the standard release because it was something unusual compared to other American Single Malts I've tried. As such, the Bonded one comes out the winner, but in reality, you'll be a happy camper with either.  Cheers!
My Simple, Easy-to-Understand Rating System
Posted by Whiskeyfellow at 6:47 AM