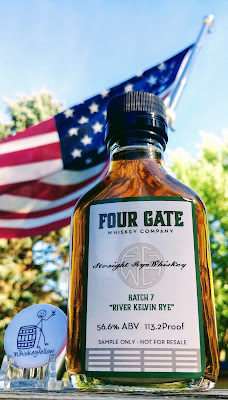 At the end of April, I reviewed Four Gate Whiskey Company's The Kelvin Collection II Bourbon.  It was one of the most expensive whiskeys I've reviewed.  I generally don't like reviewing high-dollar whiskeys because, for the most part, I find them good but not great, and certainly not a good return on investment. But, the Kelvin Collection II wrecked that theory for me, and I ponied up my Bottle rating for it. You can read all about Four Gate in that previous review, I won't rehash it.
When Four Gate approached me again, this time for a review of River Kelvin Rye, I admittedly was excited. This one is officially called Batch 7, and it isn't quite as expensive as The Kelvin Collection II, but it is close, ringing in at $174.99.  Don't stop reading because of the price. Do what I do, keep an open mind, and we'll #DrinkCurious shortly.
River Kelvin Rye is a blend of 7-year old barrels from MGP. They're all distilled from a mash of 95% rye and 5% malted barley, the standard MGP rye recipe. It is non-chill filtered and bottled at its cask strength of 113.2°. The 1484 bottles can be purchased in Kentucky, Indiana, or online from Seelbach's. One final bit of information you'll want to know - they're currently finishing some of this batch in Split-Stave™ barrels which will be available this Fall, and another in Ruby Port-Rum casks in 2021.
This is the first Straight Rye released by Four Gate.

“We’ve always been on the lookout for barrels of great rye,” said Chief Barrel Officer Bob D’Antoni. “We tried all sorts of barrels that weren’t quite up to our standards before we found these.”

Now that all the background is out of the way, let's get to it... and I'd like to thank Four Gate for sending me a sample in exchange for a no-strings-attached, honest review.
Appearance:  In my Glencairn glass, Batch 7 appeared as a deep caramel-amber. It left absolutely no rim on my glass, each time I tried to form one, it instead came down like a heavy curtain to drop back to the pool.
Nose:  One of my favorite candies these days is candied orange slices. And, that's the first thing I smelled when I brought the glass to my nose. Toasted oak was next, then orange peel. Finally, the aroma of mint.  When I inhaled through my lips, I discovered peppercorn and vanilla.
Palate:  A thin and oily mouthfeel started things off. Flavors of mint and tangelo greeted the front of my palate. As it rolled down mid-palate, there was sweet brown sugar and lemon pepper, forming an interesting combination. Then, on the back, a combination of both smoky and dry oak along with clove.
Finish:  A finish of lemon meringue and black pepper gave a medium-to-long, sweet, and spicy experience.
Bottle, Bar, or Bust:  This is a very delicious, tasty rye. While each barrel of any whiskey is unique, there is no mistaking this for anything but MGP barrel-proof rye. It had a lovely nose, a tasty palate, and a beautiful finish. I have no complaints whatsoever about Batch 7 - except that it isn't a $175 whiskey. I've had equally-amazing seven-year-plus MGP barrel-proof ryes for between a third and just under half the price. Because of that, this one earns a Bar rating. You'll want to try this one first before committing to a bottle.
On a final note, I would be very interested in trying the upcoming barrel-finished releases of this. Either of those could be a game-changer and each would earn its own, independent rating. Cheers!
My Simple, Easy-to-Understand Rating System
Posted by Whiskeyfellow at 6:49 AM