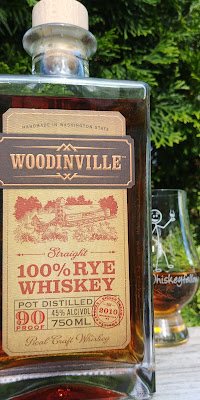 The State of Washington is known for many good things. Technology and industry. Timber. Gorgeous scenery. Wine. And, if you don't know, yes, whiskey.
I've written about Woodinville Whiskey Company a few times. My introduction to it was its Straight Bourbon, which reminded me of Elijah Craig. Then, I was able to take part in a rather stupendous barrel proof pick of the Bourbon.  When a sample of their Straight 100% Rye showed up for review, I was captivated.  Would this be as great an experience as the Bourbons? Only time would tell. And, that time is now.
Woodinville starts off with a mash of, as the name implies, 100% Rye. That could be a blend of both malted and unmalted rye. You'd need the malted stuff to get things fermenting. All of that rye comes from Quincy, Washington, and is exclusively grown for Woodinville. That's then taken to the pot still for distillation. Then, the barrels get filled. Each barrel uses staves that were seasoned 18 months in the open air. Those staves are used to create 53-gallon barrels that are first subject to heavy toasting and then heavy charring. The barrels are then trucked over the Cascade Mountains to eastern Washington where they're aged in open-air rickhouses.
There is a barrel proof version of it, but that's a distillery-only item. For the rest of the distribution, it is bottled at 90°.  It carries no age statement, but we know that means it is at least four years old and things at Woodinville tend to age closer to five. Retail is about $54.99.
I'd like to thank Woodinville for providing me a sample in exchange for a no-strings-attached, honest review. Let's get to it, time to #DrinkCurious...
Appearance:  In my Glencairn glass, this Rye appears as a very orange amber. It produced a medium-thick rim that created very fat, heavy legs to drop back to the pool.
Nose:  To suggest this was anything less than very aromatic would be unfair.  As I was letting this whiskey rest, it filled the air with cherry pie filling. That was an attention-getter. As I brought the glass closer to my face, the cherry pie filling remained, and was joined by rye spice, cinnamon, nutmeg, and, get this, apple pie filling.  Now I got excited.  When I inhaled through my lips, it was like I was holding a freshly-baked apple pie, the crust and all.  I found this whole nosing experience rather mind-blowing.
Palate:  The first sip was thin and watery. However, it did bring quite the punch of wood.  Subsequent sips kept the mouthfeel thin and when the palate shock ended, I was better able to discern flavors.  Up at the front was toasted oak and honey. Mid-palate was a combination of cherries, leather, and a certain earthy quality. Then, on the back, a definitive rye spice, cinnamon, and brown sugar.  It was strange to have the rye spice on the back, especially considering the mash is all rye.
Finish:  Originally, I thought the finish was medium in length. Again, that cherry pie came into play, which was joined with barrel char and dry oak. When I thought that was the end, I found very long-lasting leather that lasted almost two minutes.
Bottle, Bar, or Bust:  If I could find something to complain about, it would be proof. At 90°, it packed plenty of taste. But, knowing there is a barrel-proof version has my curiosity piqued. The nose was simply gorgeous. The palate was complex. I love the whole idea of pie smells and flavors. When I take all that into account and tack on the reasonable price, this one takes my coveted Bottle rating. I'm positive you'll enjoy this one. Cheers!
My Simple, Easy to Understand Rating System
Posted by Whiskeyfellow at 6:22 AM