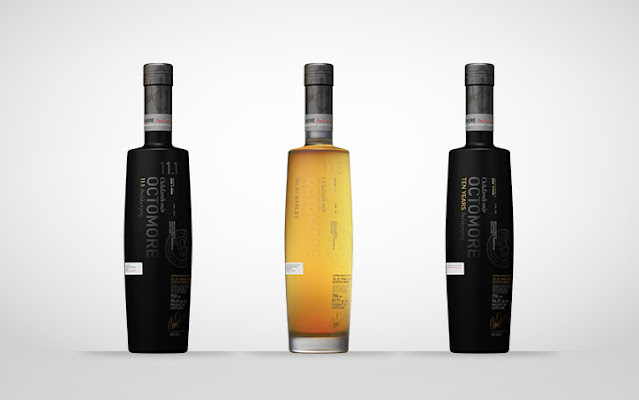 Octomore.  Have you heard about it?  If that's new to you, it is a Scotch for folks who love peat. I don't mean just a little peat. I mean a mouthful of it! You see, Octomore, which is made by Bruichladdich, is hands-down the most heavily-peated Scotch around. More peat than Laphroig. More peat than Lagavulin. More peat than even Ardbeg.

Octomore is a special release each Fall. Fans run to the store and snag their bottles as soon as it is released, they post all over social media photos of their trophies, just like what happens with many coveted whiskey releases. Well, here we are, it is Fall, and the 11th incarnation is about to hit the shelves on October 1st.

I've always been big on transparency. That's one of the things I point out when folks do things right, especially in the whiskey business. I also hold myself to that very rigorous standard - I am always transparent with my readers. 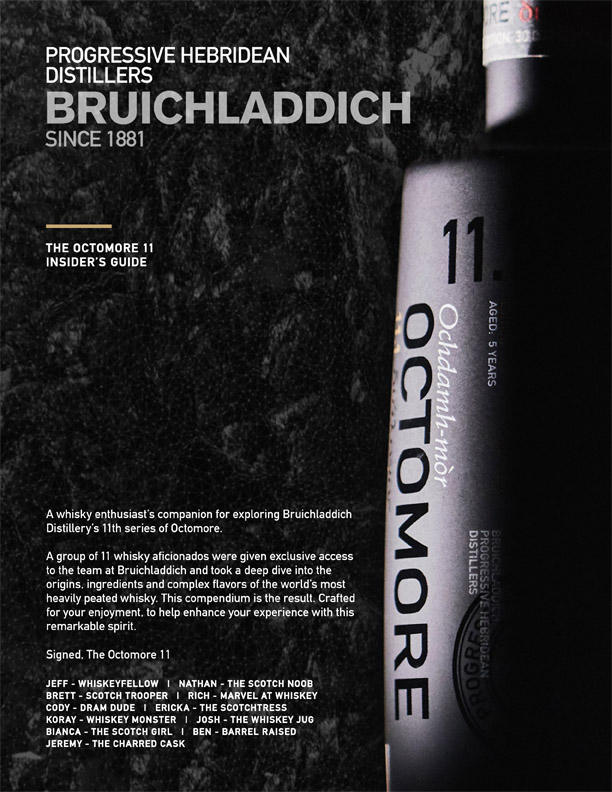 The Octomore 11 consist of the following:

We were paired together (which was an interesting challenge all by itself)  to each write a section of this handbook.  I was teamed up with Nathan to pen the Background and History of Bruichladdich, which is the first installment. Nathan is a great guy, and despite the fact we have very different writing styles, I believe we meshed well together.

So, yes, there is sponsored content that I am sharing today, and yes, that means I was paid for my contribution to The Octomore 11 Insider's Guide. But, Nathan and I did our own research and what we've put together is our own thoughts.

As far as how I'm approaching the tasting notes and my final recommendations, those are not sponsored content and you can expect from me what you have always expected from me: You're going to get my honest opinion on the Octomore 11 releases. This week I will also publish my reviews on Octomore 11.1, Octomore 11.3, and Octomore 10 Year.

And now, it is time to release the first two sections of the Insider's Guide.  The first, as mentioned, was created by Nathan and me, and that chapter is being hosted on his ScotchNoob blog. The second installment is called The Origins of Octomore, composed by Scotch Trooper and Marvel at Whisky. As neither has a dedicated blog, I'm hosting it on mine. This is a fascinating read, and I hope you enjoy it. Cheers!

2. The Origins of Octomore

On the Origin of Octomore by Means of Masterful Selection, and the Preservation of Peated Malt in the Struggle for Whisky Perfection. (cite: Charles Darwin)

With a wee wry smile, he’d say “because no one else had the balls to do it”.

When it comes to the origins of Octomore, it may have started with a singular experiment to see how peaty Jim McEwan could make a whisky, but that was just the beginning.

Bruichladdich has always been known as an experimental distillery, the “progressive Hebridean distillers”, yet in 2002, that state of mind took on a whole new meaning. With the production of a whisky peated to 80 parts per million (PPM) – the measurement used to determine the phenol content of the malted barley – a benchmark was set. In that moment, 80 PPM defined a brand identity and “Octo”, the Greek and Latin word for eight, became the root from which the name Octomore was born.

As with all pioneers, challenging the status quo is habitual, and once that dream had been conceived, retreat was simply not an option. In the world of Octomore, to dare is to do. Yet to defy the traditionalists and all that is accepted in the world of whisky, was thought a fruitless mission, an experiment that could not succeed. How could it?

A young, super heavily peated, cask strength whisky would go against the very grain of widely-adopted industry conventions, it was an impossible task, and solving it, an impossible equation. For Jim and his team however, what was to become the Octomore equation, was the evolution of much more than simply the pursuit of peat. Octomore presented Bruichladdich with the opportunity to consider whisky in its entirety, to explore the sum total of what can be created when you start with no preconceived notions.

And so, with only one constant – that the whisky should never be less than 80 PPM, the Octomore team set forth on a journey of discovery of the spirit, the peat, the cask and the process. With no knowing of what was to be realized and wild variations from batch by batch, that inconsistency became the very story of Octomore.

Therein lies the impossible equation: What if the sum total of all these unlikely parts, sewn together through a philosophy of intrigue, curiosity and innovation, meant that an improbable theory was actually solvable? A concept which should be unthinkable, let alone drinkable, was actually a revelation.

Over the years that followed, Octomore has typically been released after a 5 year maturation period, peated up to a mind-bending 309 PPM and bottled at around 60% abv. The series has prevailed and become an accepted formula that proves nothing is impossible. When it comes to Octomore, there is simply nothing else like it.

Octomore is one of those whiskies, that if you know, well, you know. When you nose that glass, when that liquid touches your lips and you taste it, you can’t help but acknowledge the progressiveness of Octomore – a spirit of flawless integrity, a dram which respects the past, but does not live in its shadow. You realize the spirit is not too young, the cask and maturation process has been kind and imparted sweet, fruity and floral notes with a rich and mouth-coating profile. It is undeniably about the quality of the cask, not necessarily how long the spirit rests in there. You can taste the quality of distillation, the smoothness and balanced mouthfeel. This is a whisky that’s not driven by peat, what you think and what you taste are two different things. Rather, the peat binds the flavors together, not overbearing in any sense, complimenting and warming through the long finish.

Octomore is not a whisky for everyone, and that’s how we like it. For those that have risen to the challenge and spent time solving this impossible equation, they know, there is no other cult whisky that stands alongside it.

Part One of The Octomore 11 Insider's Guide, "Background and History of Bruichladdich" has been released and can be found on Scotch Noob's blog.

Part Three of The Octomore 11 Insider’s Guide, “The Numbering System and History of Releases,” will release tomorrow. Check back here for a link! 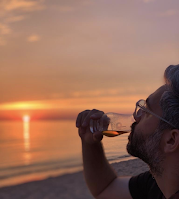 Rich a.k.a. @marvelatwhisky is a content creator widely recognised for this distinct visual identity of fusing spirits with animated characters. Whilst his public persona is designed to showcase his creative expression and technical skills, most of his work with brands is focused on graphic design and visual effects, rather than the superheroes for which he is renowned. Rich is an avid enthusiast of the golden spirits, be it Scotch, Whisk(e)y, Bourbon or Rye and advocates passionately for its use in resolving global conflict. 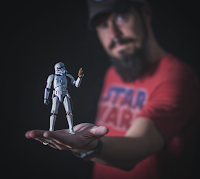 Brett is a whisky enthusiast with a Star Wars problem. He has worn many hats in the industry, but the one he enjoys most is sharing his whisky knowledge while playing with toys. Brett's mission has always been to show the light side of whisky by making it fun and approachable. Posted by Whiskeyfellow at 10:30 AM