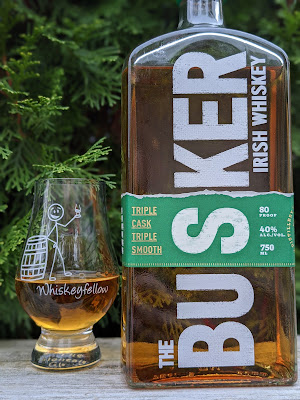 Life can be full of surprises. Right now there is a resurgence in Irish distilling that goes beyond the big boys expanding their reach. What started a few years ago is now coming of age and ready for the market. One such example is Royal Oak Distillery, which is built on an 18th-century estate in County Carlow. Imported by Disaronno International, Royal Oak has both pot and column stills.

The distillery produces four versions of Irish whiskey: Single Grain, Single Malt, Single Pot Still, and a blend of the three.  Today I'm reviewing The Busker Triple Cask Triple Smooth which is the latter. A majority of the blend is made from the Single Malt and Single Pot Still expressions, with the remainder Single Grain. The Blend is matured in three different casks formerly holding Bourbon, Sherry, and Cantine Florio (1833) Sicilian Marsala.

This is for the wanderers, the sharers of stories, the followers of dreams, living unabashedly. Meet The Busker, its roots now deep at Royal Oak Distillery, the home of Irish Whiskey Culture [...] But only in wandering far has it found its true place in the world here among the spirited, like you. - Royal Oak Distillery

There is no age statement on the label, but all that means it was at least three years, as that's what's required by Irish law. The Busker is 40% ABV and retails for $24.99.  It hit the market in September and while not common, it enjoys a wide distribution in the United States.

All that information is nice to know, but in the end, the only thing that really matters is how it tastes.  I purchased this whiskey at a local store, I've cracked it open, and I'm ready to #DrinkCurious and tell you all about it.

Appearance:  In my Glencairn glass, The Busker appears as an obvious gold color. It created a medium rim that generated thick, fast legs to drop back to the pool of liquid sunshine. When I suggest fast, they dropped as quickly as they formed.

Nose:  The fruitiness was unmistakable. I could smell it before it came anywhere near my face. Aromas of plum and raisin were easy to pick up, the banana and pear less so. When I inhaled through my open lips, it was a palpable flavor of vanilla.

Palate:  A thick, buttery mouthfeel coated everywhere, leaving nothing untouched. There was no ethanol to distract from what I would experience. On the front, I tasted a combination of vanilla and dark chocolate. As the liquid moved to my mid-palate, the only thing I discerned was malt. Then, on the back, it was an interesting marriage of cinnamon, raisin, and toasted oak.

Finish:  A long - very, very long, lasting finish of vanilla, white pepper, and toasted oak would not give up. There was absolutely nothing harsh about it.

Bottle, Bar, or Bust:  This is a $25 Irish whiskey and it isn't overly complicated. In fact, it is the opposite. But, it leaves other similarly-priced competitors in the dust. The Busker is everything you've ever heard about Irish whiskey - smooth and simple. I was shocked at how much I enjoyed it, especially since this is an off-the-radar distillery. Cutting to the chase, this is about as easy of a Bottle rating as it gets. It is delicious, anyone can afford it, and I can't wait to see what else comes out of this distillery. Cheers!