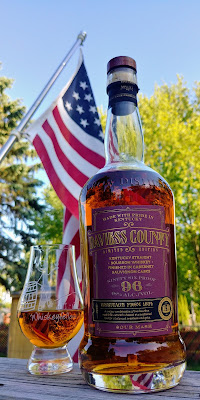 One of the most widely-recognized grape varietals in the world, grown in nearly every major wine-producing region is Cabernet Sauvignon. Until the 1990s, it was also the most widely planted grape. It was finally surpassed by Merlot, but then in 2015, Cabernet Sauvignon regained its throne. The reason for its popularity is how flavorful it is. Typically, you'll find flavors of heavy red and black fruit.
Today I'm reviewing Daviess County Bourbon Finished in Cabernet Sauvignon Casks. It is produced by Lux Row Distillers of Bardstown, Kentucky.  Daviess County Bourbon is a new expression from Lux Row, and is a blend of sourced wheated and traditional mash Bourbons, most likely from Heaven Hill.  If you want to learn more about the standard expression, you can read my review from May. For the record, it earned my Bottle recommendation.
As the bottle implies, Lux Row took the standard expression and dumped it in Napa Valley Cabernet Sauvignon casks, where it rested another six months.  It carries no age statement, however, we know that means it must be at least four years old. Bottled at 96°, the suggested retail is $44.99.
I'd like to thank Lux Row for sending me a sample of this Bourbon in exchange for a no-strings-attached, honest review. Let's get to it.
Appearance:  In my Glencairn glass, Daviess County Bourbon appears chestnut in color. It left a very thin rim on the wall which created very slow, fat legs to drop back to the pool of liquid sunshine.
Nose:  The first thing to hit my nostrils was old oak that was slightly musty. Past the oak were plum, blueberries, molasses, and vanilla. That's right, I said blueberries! When I inhaled through my lips, I picked up black currant.
Palate:  The initial sip was very thin and oily. There was no alcohol punch whatsoever. At the front was smoked oak. I was a bit taken back that there was nothing else offered. However, as it moved mid-palate, I discovered caramel, plum, and (again) blueberry. I must admit that I've never used blueberry in a whiskey review before. The back consisted of honey and grilled peaches.
Finish:  Clove and blueberry stuck around for a very long, enticing finish that lasted several minutes.
Bottle, Bar, or Bust:  This expression of Daviess County Bourbon is a fruit bomb. That's absolutely due to the wine casks.  Blueberry is my favorite fruit, and as you can imagine, when I picked up that note in the nose, palate, and finish, I became a very happy camper. There was nothing off-putting about anything from beginning to end, and when you consider the $44.99 investment, this one becomes a very easy Bottle recommendation.
On an ending note, I found the Cabernet Sauvignon finish to be the most interesting and the best of the three.  Cheers!
My Simple, Easy-to-Understand Rating System
Posted by Whiskeyfellow at 6:00 AM