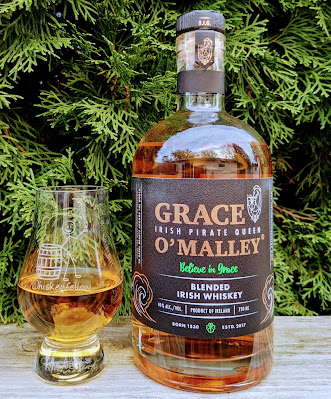 Irish whiskey has been growing by leaps and bounds. What once was frighteningly a dying breed just a few years ago has turned things around and is now one of the fastest-growing segments. If you search the shelves of your local liquor store, you'll find a bunch of choices, but they all come from a small number of distilleries. Except, in the last year, that population has grown because what's been sitting in warehouses waiting to become at least three years old is the new distillate from unfamiliar distilleries.

The real Grace O'Malley was a legendary Irish pirate queen. Born in 1530 to Irish nobility, she fought hard for Ireland's independence from England. She was declared an enemy of the state, and a fierce pirate. She was twice arrested and sentenced to death, yet managed to curry favor and garner her release in exchange for all of her possessions. She met Queen Elizabeth but refused to kneel before her as O'Malley did not recognize the Queen's ownership over Ireland.

Grace O'Malley Irish Whiskey bucks the norm as well. It contains the highest malt content of any blended Irish whiskey at a whopping 46% (meaning the remaining 54% is distilled from grain). Some of the distillate was double-distilled, some triple-distilled.  Master Blender Paul Caris personally selected barrels ranging in age from three to ten years. Each had different cooperages:  French oak, American oak, rum were highlighted. Once the blending was complete, it was bottled at 40% ABV (80°), and a 750ml will set you back about $39.00.

Before I tell you if Grace O'Malley is the queen of Irish Whiskey or not, I'd like to thank them for sending me a bottle in exchange for a no-strings-attached, honest review. And now, it is time to #DrinkCurious.

Appearance:  In my Glencairn glass, Grace O'Malley presented as a dull gold in color. It produced a medium rim that led to fat, sticky legs which pretty much refused to drop back into the pool of liquid sunshine.

Nose:  My whiskey library filled with aromas of malt and fruit.  As I brought the glass to my face, I sniffed out honey, vanilla, citrus, apple, and pear.  When I inhaled the vapor through my mouth, I was able to narrow down the apples to Granny Smith.

Palate:  Things started off with a watery mouthfeel.  Overall, it featured a medium body.  On the front of my palate, I tasted flavors of apple, vanilla, lemon, and orange. Cocoa and toasted cereal grains took over at mid-palate. Then, on the back, it was pure honey.

Finish:  The finish was shorter than I'd hoped for. It was a lovely blend of toasted oak, vanilla, pink peppercorn, and date.

Bottle, Bar, or Bust:  It is admittedly difficult to dislike Irish whiskey. That's not to say there aren't mediocre examples, but Irish whiskey is known for being smooth and easy to sip. I enjoyed my pour of Grace O'Malley. There was more going on with this than I expected. I would have preferred a longer finish, but that only means it gets sipped faster. I'm lobbing my Bottle rating at this one, I'm betting it will make you happy, too. Cheers!

Posted by Whiskeyfellow at 5:15 AM