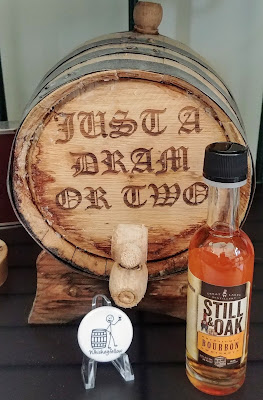 Wisconsin has been coming into its own as far as distilling goes. It has many craft distilleries and some have garnered national attention (and praise). Some do Bourbon well. Some are better at Rye. Others dabble in American Malts and other distilled spirits. I'm not going to pretend they're all great because, unfortunately, they're not. But, my point is we have some smart distillers here that know what they're doing and have real experience.

Once such experienced distillery is Great Lakes Distillery in Milwaukee. In fact, it is Wisconsin's oldest distillery, the first to open since Prohibition ended. Founded by Guy Rehorst, it offers a variety of spirits.  I've already reviewed KinnicKinnic American Whiskey and Still & Oak Rye. But, today, I'm reviewing Still & Oak Straight Bourbon.

Still & Oak is made completely of Wisconsin-sourced grains.  In this case, that's 67% corn, 22% malted barley, and 11% rye.  Once that's fermented and distilled, it rests in 53-gallon, new charred oak barrels.  The Bourbon carries a two-year age statement, is non-chill filtered, and proofed down to 86°.  A 750ml bottle will set you back just shy of $35.00.

I'd like to thank Great Lakes Distillery for providing me a sample of this Bourbon in exchange for a no-strings-attached, honest review. And now, it is time to #DrinkCurious.

Appearance:  In my Glencairn glass, Still & Oak appeared as honey in color and was a bit cloudy. No worries, that's the product of being non-chill filtered. It left a thin rim on my glass that created very fast, heavy legs. But, strangely enough, the rim remained and didn't seem to dissipate.

Nose:  Aromas of corn and oak started things off. Additionally, I picked up nuts and leather, along with a touch of caramel. What was missing was a blast of ethanol from a younger Bourbon, and that's a good thing. When I breathed the vapors through my mouth, it was all corn.

Palate:  That no ethanol burn thing carried over to the mouthfeel as well. In fact, it could easily be described as soft. Flavors of dark chocolate, nutmeg, and cherry were at the front. Things got spicier come mid-palate with tobacco and toasted oak. A combination of sweet caramel and spicy cinnamon took control of the back.

Finish:  Medium in length, it began with clove and dark chocolate. The clove fell off but the chocolate remained. It also left a decent tingle on my hard palate, something that I typically don't expect for an 86° whiskey.

Bottle, Bar, or Bust:  I liked this Bourbon but there was also something missing for me. Maybe cranking up the proof a few points might do it. I don't believe age is the issue. I found some of the notes to be too delicate. However, I also understand that bold flavors aren't for everyone. For $34.99, this is a very easy sipper and something folks could enjoy, especially on a hotter summer day where you don't want a stiff drink. The Still & Oak Bourbon gets a Bar rating from me. Try this one, see if it appeals to you. Cheers!