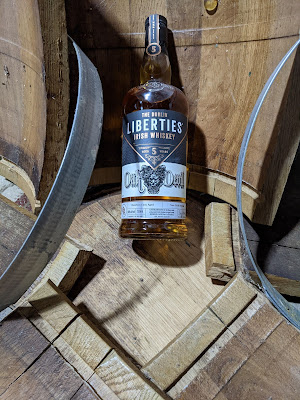 Founded outside the walled city of Dublin in 12th-century Ireland, The Liberties was a district of illicit trade and a bit of chaos. While considered part of Dublin, it was not subject to its laws or government structure. The Liberties was the center of Dublin industry, and you'd think with all that commerce, there wouldn't be impoverishment and destitution, but that is how much of the populace lived - at least until very recently. It has been the center of various rebellions almost since its inception.

If you're wondering why the rumors of the devil's demise include being made into whiskey barrels, The Liberties has a rich history of Irish distilling. Guinness has been there for generations, Jameson, Teeling, George Roe & Company, and Powers were there long ago.  Teeling has been reborn, and The Dublin Liberties Distillery is new to the scene.

Owned by Quintessential Brands Group, who also counts The Dubliner and Dead Rabbit in its portfolio, The Dublin Liberties Distillery is headed by Master Distiller Darryl McNally.  Their five-year release, Oak Devil, is a blend of sourced malt and grain Irish whiskeys that have been aged in former Bourbon barrels. It is non-chill filtered and then packaged at 46% ABV (92°) and retails for about $38.00.

I'd like to thank Quintessential Brands for providing me a bottle of Oak Devil in exchange for a no-strings-attached, honest review. And now, it is time to #DrinkCurious.

Appearance: In my Glencairn glass, Oak Devil appeared like an oaked chardonnay. It was absolutely golden in color. An ultra-thin rim left surprisingly thicker, fast legs to drop back into the pool of liquid sunshine.

Nose: I found this to be light and fruity, with aromas of apples, citrus, and melon. They were followed by fresh hay and ended with floral perfume. When I inhaled the vapor through my lips, the only things I tasted were vanilla and brown sugar.

Palate:  Like the nose, the mouthfeel was light - almost lighter than air. Flavors of apple cider and caramel started things off, but it wasn't like eating a caramel apple. Come mid-palate, I found cinnamon spice, and on the back, a blend of nutmeg and milk chocolate.

Finish: As airy as the mouthfeel was, the finish seemed to go on forever. At first, I got a mocha blast, which gave way to charred oak and cinnamon.

Bottle, Bar, or Bust: Oak Devil was uncomplicated but sometimes that's all you want. It has a low barrier of entry, especially considering it isn't 80° like many of its Irish brethren. The Dublin Liberties recommended pouring Oak Devil over ice or using it as a cocktail base. I did neither - I drank it neat. Guess what? It required neither. I enjoyed it just fine as is and I believe you will, too.  As such, this one takes my Bottle rating. Cheers!