These days several distilleries are finishing whiskey in port casks. Finishing is fine in practice, and I'm generally a fan - not just when a former port cask is used, but most types of finishing. I enjoy seeing (rather, tasting) how whiskey can be changed by having it rest for a few months in a different cask. It is fun to taste the original and the finished whiskeys side-by-side.

Today I'm reviewing Port Wood by The GlenDronach. Port Wood is a single malt from Scotland's Highland region. It started as a tribute to the 19th century when Scotland was importing casked port wine. Port is a fortified wine, meaning it is blended with a portion of distilled spirit, usually brandy. It comes from the Douro Valley region of Portugal. It has a rather high ABV content, 20% or more, versus non-fortified wine, which ranges between 9% and 15%. Port is typically aged in very large casks, called pipes, that are 600 liters (about 127 US gallons).

But, Rachel Barrie, the Master Blender of The GlenDronach, wanted to do something different. Instead of merely finishing Scotch in port pipes, she went for the full monty and aged the whiskey in the pipes. That was blended with Scotches aged in Olorosso and Pedro Ximénez (PX) sherry casks. To be clear, all three types were aged singly and, once matured, married. Olorosso is typically a dry sherry, offering nutty flavors. PX sherry, on the other hand, is made from sun-dried grapes and is normally thick and sweet. The pipes Barrie used formerly held both tawny and ruby ports. Tawny will often be aged long-term, whereas ruby would characteristically spend two years or less in wood.

And now, we cycle back to Port Wood. The 2020 release carries no age statement (versus the previous release having a ten-year). It is made from 100% malted barley and after aging, it retains its natural color and is unfiltered. Packaged at 46% ABV (or 92°), you can expect to pay about $89.00 for a 750ml bottle. It shouldn't be overly difficult to locate as it enjoys nationwide US distribution.

Before I get to the tasting notes, I'd like to thank The GlenDronach for providing me a sample of Port Wood in exchange for a no-strings-attached, honest review. It is time to #DrinkCurious!

Appearance: In my Glencairn glass, Port Wood presented as a rich, orange-amber. It created a thicker rim and left sticky, fat legs on the wall of my glass. Those took their time to crawl back to the pool of liquid sunshine.

Nose: A commanding aroma of plum hit my nostrils first. Once I got used to it, raisin, cherry, and strawberry kept the fruit theme going, which then surrendered to honey and, finally, chocolate. When I inhaled the vapor through my lips, I found raisin and ginger.

Palate:  The mouthfeel was initially thin, but quickly became buttery and coating. Black cherry and milk chocolate caressed the front of my palate.  As it moved to the middle, flavors of plum and blackberry joined with cocoa powder and orange peel. Then, on the back, I tasted red grape, date, and dry oak.

Finish: I found the finish to be warm and long-lasting, with more of that dry oak, ginger, cocoa powder, orange peel, and plum.

Bottle, Bar, or Bust:  I've tasted several expressions of The GlenDronach this year, and this one is my favorite of the affordable choices (it isn't the Kingsman, but it also isn't $1300 a bottle). Port Wood is complex enough where I had to concentrate on what was going on, otherwise, I feared I'd miss something. Conversely, if I was just sipping on my deck, I believe I could relax and lose myself in the moment. There really is nothing not to like, including the price. Do the math and that's the equation of a Bottle recommendation. Cheers! 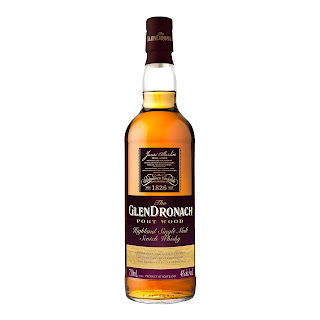