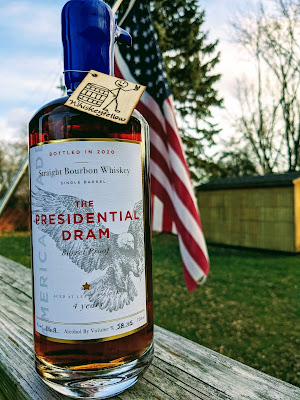 The Presidential Dram is sourced from MGP and distilled from a mash of 75% corn, 21% rye, and 4% malted barley. It entered the barrel at 120° and then aged for One Term (four years, although Dave Schmier of Proof & Wood said it "could be" five). It is a single-barrel bourbon, bottled at a barrel proof of 116.9°, and is non-chill filtered. One of the neat things with Proof & Wood is what they offer tends to be priced quite reasonably. In the case of The Presidential Dram, you are looking at $79.99, which is $10.00 more than The Senator, but equally less than The Justice.  The Presidential Dram is a once-every-four-years release.

I'd like to thank Proof & Wood for sending me a sample of The Presidential Dram in exchange for an honest, no-strings-attached review.  And now, it is time to #DrinkCurious.

Appearance:  In my trusty Glencairn glass, The Presidential Dram is deep, reddish amber. It left an ultra-thin rim on the wall, and the legs, if you can even call them that, were fat tears that didn't really move.

Nose:  Sweet and fruity aromas wafted from the glass. What was lacking was anything even resembling wood. The sweet smells were chocolate and caramel. The fruity were citrus, plum, and coconut. When I inhaled the vapor through my mouth, a tsunami of butterscotch raced over my tongue.

Palate:  This is where things got crazy. For me, the first sip of anything is concentrating on the mouthfeel. I don't even care what it tastes like. With The Presidential Dram, my attention deficit disorder kicked in. I was so overwhelmed with flavors that I lost my train of thought. As it turned out, it was thick, creamy, and full-bodied. What distracted me was the punch of plum, cherry, and caramel on the front. At mid-palate, I tasted orange peel, mint, and malted milk balls (think Whoppers without the chocolate coating). Then, on the back, spice finally came into the picture with black pepper, clove, and toasted oak. It was joined by chocolate.

Finish:  There was a slight sizzle on my hard palate, but the finish itself was long and almost silky. It began with high-cacao dark chocolate, charred oak, cherry, and ended with orange peel.

Bottle, Bar, or Bust:  The Presidential Dram is only four years old, but you'd never know it. Heck, I had a rough time buying it. This Bourbon could easily pass for much older MGP stock. This one hits all the right buttons for me. If you're concerned that a four-year Bourbon will set you back $80.00, those will evaporate once you taste it. It is time to start reflecting on the 2020 best whiskeys of the year, and The Presidential Dram is a serious contender. The rating on this is simple:  Bottle. If you see it on the shelf, just buy it. Cheers!