The BenRiach The Twenty One Single Malt Review & Tasting Notes 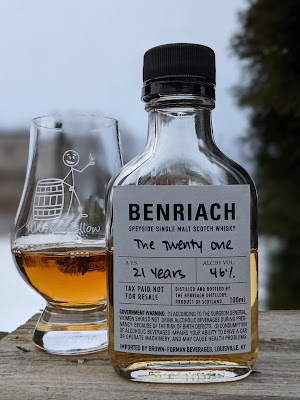 Founded in 1898 by John Duff, the initial run for BenRiach was very short-lived - only two years. Then, it was shuttered due to the Pattison Crash. If you've not heard of it, the short story is it took out many distilleries. The longer story is it was caused by independent bottlers gaming the system, so much so that when the biggest firm, Pattison, Edler & Company went under, they took out nearly a dozen others in the process. That cascaded and led to the bankruptcies of the distilleries. It was not a good time to be in the whiskey business.
It was then reopened in 1965 by The Glenlivet. During that 65-year hiatus, the building was never torn down because the distillery next door, Longmorn, used BenRiach's malting floor and some other equipment while it was mothballed. Then, Seagrams purchased The Glenlivet in 1978, which was acquired by Pernod-Ricard in 2001.
And, then, the distillery was shuttered again from 2002 to 2004. It was purchased by Brown-Forman, which owns BenRiach to this day. The Master Blender, Rachel Barrie, runs things "unconventionally Speyside."
What does "unconventionally Speyside" mean? First and foremost, it isn't overly common for Speyside whiskies to be peated. BenRiach offers both peated and unpeated expressions. It also has an extensive collection of various cooperages which, in turn, impart different flavors and characteristics to the matured whiskies.
When presented with an opportunity to review The Twenty One, my heart skipped a beat. Getting into older Scotches is a pricy concept, and there's an admittedly romantic notion of drinking something that is decades old. The Twenty One is a single malt that was aged in former Bourbon, sherry, and red wine casks along with virgin oak. Those barrels were subsequently blended to create a non-chill filtered, naturally-colored Scotch. While we don't know exactly how old the various components were, we do know the youngest was 21 years.

“These older expressions are a beautiful reflection of the landscape around the distillery with intriguing, luxurious layers of flavor imparted by the eclectic casks sourced from around the world. The refreshed Benriach range is for those open to new possibilities, building on a wealth of experience and tradition. I invite the drinker to join me on this creative journey, as we explore the lush rewards of single malt whisky.” - Rachel Barrie

Bottled at 46% ABV (92°), you can expect to pay about $199.00 for a 750ml package. Before I get to the tasting notes, I'd like to thank The BenRiach for providing a sample in exchange for a no-strings-attached, honest review. Time to #DrinkCurious!

Appearance:  In my Glencairn glass, The Twenty One shows up as honey-gold in color. It fabricated a husky rim that formed broad, fast legs that fell back into the pool of liquid sunshine.

Nose:  This Scotch was plenty fragrant. Oh, it wasn't a blast of smoke, rather, it was orchard fruits mingled with it, and that was just allowing it to breathe. The fruits smelled of apple, apricot, and plum. I also smelled oak and chocolate. When I inhaled the vapor in my mouth, smoky vanilla rolled across my palate.

Palate:  A silky, creamy mouthfeel started the show. The more I sipped, the creamier it became. On the front of my palate, I tasted sweet, smoky peat and peach. The peat was not the star of the production, rather, it was a supporting character. At mid-palate, I tasted chocolate, apple, and pear. Flavors of toasted oak, toffee, and an encore of the light peat constructed the back.

Finish:  It started short-to-medium. Like the mouthfeel, the more I imbibed, the longer the finish became. Eventually, it seemed to last forever. Smoke, plum, honey, pear, and toasted oak danced about.

Bottle, Bar, or Bust:  Just because something carries a decades-old age statement doesn't mean it is great or even good. I've had some mediocre, older whiskies. The Twenty One is absolutely the opposite. If I had to select one word to describe this experience, it would be luxurious. From the amazingly refined nose to the silky mouthfeel, to the fruity palate and what is a near-perfect peatiness, there is simply nothing to complain about. This is a mesmerizing affair and I'm happy to fork over the premium to partake in it. There's not a doubt in my mind that a Bottle rating is owed. Find a bottle, seriously. Cheers!

Posted by Whiskeyfellow at 5:36 PM