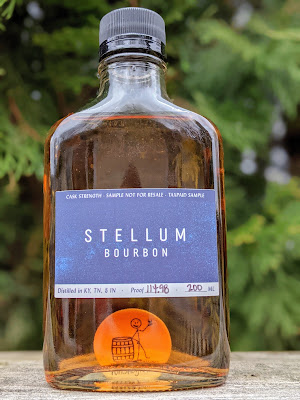 Have you heard the news?  Barrell Craft Spirits has launched a new brand called Stellum Spirits. Stellum's mission is to be clean, straightforward, and polished. The name comes from a play on the Latin term stella, meaning star. Barrell will also tell you the name just sounded cool.

"Stellum stands with the modern American whiskey drinker. We respect the history of whiskey, but we're more interested in making spirits accessible to today's audience. With an eye towards innovation, minimalism, and inclusivity, Stellum Spirits is here for you, whoever you may be." - Stellum Spirits

Last week I reviewed Stellum Rye, and you can learn more about the brand from what I wrote there. Today, I'm going with Stellum Bourbon.

One of the "cool" things about Stellum Bourbon is how it is made. It begins with a blend of three MGP mashbills:  two that are high rye (60% corn, 36% rye, and 4% malted barley), and one that is 99% corn and 1% malted barley. The remainder consists of older whiskeys from Tennessee (George Dickel) and Kentucky (an undisclosed distillery). Stellum uses a multi-step blending process to make things "just right." It is non-chill filtered, carries no age statement, and is bottled at 114.98°. Available in 45 markets, you can expect to pay about $54.99 for a 750ml package.

Before I #DrinkCurious, I'd like to thank Stellum Spirits for providing me a sample of the Bourbon in exchange for a no-strings-attached, honest review.

Appearance:  In my Glencairn glass, Stellum Bourbon was a chestnut-amber color. It formed a thicker rim that fabricated heavy, slow, sticky legs.

Nose:  Aromas of allspice and tobacco were easy to discern. I also smelled rye bread, toasted oak, and almond. When I took the vapor into my mouth, I discovered a mixture of strong almond and muted caramel.

Palate:  The mouthfeel was soft, light, and airy. This is just shy of 115°? I find that difficult to believe. On the front, flavors of vanilla, almond, and nougat gave it an almost candy bar experience. The middle featured cola, ginger, and honey. On the back, I tasted black pepper, clove, and cocoa powder.

Finish:  A medium-length finish began with clove and cinnamon, and ended with toasted oak and a drop of honey.

Bottle, Bar, or Bust:  There are a few things I want to touch on. The first is that if you told me this was 90-some-odd proof, I'd believe you. To have something drink 20-points below its stated proof is crazy. It offered zero burn either on the initial sip or the finish. The second is that this is one of those dangerous whiskeys, meaning, if you were inclined to do so, you could probably drink dram after dram and not even realize you're getting plastered.

There was absolutely nothing I didn't enjoy about Stellum Bourbon. It wasn't overly complicated, it had interesting flavors. The only thing I'd be more interested in would be a long finish, as that would likely slow down the "dangerous" part.

For $54.99, you're going to be hard-pressed to not be pleased with your purchase. I'm thrilled to have this one in my whiskey library. As such, I offer my Bottle rating for Stellum Bourbon. Cheers!