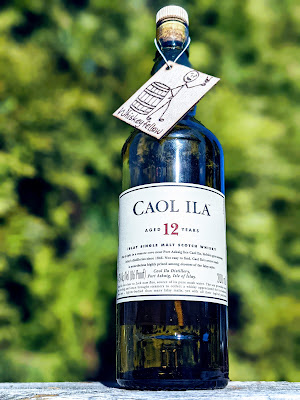 I love smoky Scotches. Don't get me wrong, I love unpeated ones as well. The peat adds an entirely new layer of adventure to the drinking experience. The peatiest stuff comes from Islay, a relatively small island off the coast of mainland Scotland.
You've probably heard of the Islay distilleries:  Ardbeg, Bruichladdich, Bowmore, Bunnahabhain, Kilchoman, Lagavulin, and Laphroaig.  There are two others that aren't quite as well-known: Ardnahoe and Caol Ila. The weird thing is, the largest Islay distillery is one of those two, namely, Caol Ila.
Pronounced Kull eye-la, the distillery was founded in 1846 and mostly remained active except during World War II. It was then taken off-line and demolished in 1972, with the plan to build a brand-new distillery that opened in 1974.
The reason Caol Ila is less recognizable despite its production capacity is about 95% of what's produced winds up going into blends, most notably, Johnnie Walker Black and Double-Black. Caol Ila makes both peated and unpeated whisky. Its peated versions use the same Port Ellen malt as Lagavulin at 35ppm.
One of the most interesting things about Caol Ila is its distillation process. The stills are filled at about 33% capacity and run 24/7. What this does is allow more contact with air and copper, which, in turn, produces a more mellow whisky.
Today I'm reviewing its core single malt, Caol Ila 12. As you've probably figured out, this one's 12 years old. This is a peated Scotch and is bottled at 43% ABV (86°). You can expect to pay about $69.00 for a 750ml.  And now, let's #DrinkCurious and find out what this is all about.
Appearance:  Poured neat in my Glencairn glass, Caol Ila 12 presented as the color of straw. It produced a medium-thick rim that generated fast, fat legs to drop back into the pool of liquid sunshine.
Nose:  I could smell the peat the second I cracked open the bottle and poured my dram. I allowed it to breathe, and peat filled the room. As I brought the glass to my face, beneath all that peat, were pear, green apple, honeydew, and brine. When I pulled the air into my mouth, I sensed melon rind and light smoke.
Palate:  From my first sip, it was like I took a spoonful of a smoky chocolate mousse. That was both the mouthfeel and what I tasted on the front. The middle was almond, brine, and melon, while the back offered flavors of citrus, sweet tobacco, oak, and peat.
Finish: The finish was a nice combination of sweet and smoky. The peat remained and was joined by sweet tobacco, smoked oak, dried fruits, and then, late to the game, black pepper. Initially, I thought the finish was short, but after another sip, it grew into medium-long.
Bottle, Bar, or Bust:  As I said at the start, I love peated Scotch. Despite the fact this has a 35ppm phenol, placing it in the heavily-peated category, the distillation process tamed it, and it worked. It was a welcomed surprise. There was no astringent (Band-Aid) quality to it. As simple as the palate was, I found it enchanting. Frankly, it is a shame that most of this winds up as a blended component for other whiskies. I'm happy to spend $69.00 on Caol Ila 12 and it is a welcome addition to my whiskey library. An obvious Bottle rating. Cheers!
My Simple, Easy to Understand Rating System
Whiskeyfellow encourages you to enjoy your whiskey as you see fit but begs that you do so responsibly.
Posted by Whiskeyfellow at 6:00 AM