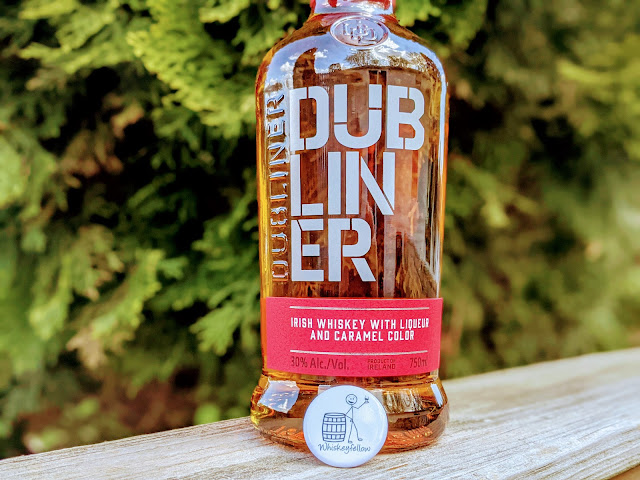 There are days where it is hot, you're tired, and you just want something refreshing to sip on. It was the first such day in Wisconsin for 2021, Mrs. Whiskefellow and I did yard work, and we were both pooped. I didn't want a full-blown whiskey, it was just not the right day (weird, right?). But, I was hurting, I wanted to relax, and I was hoping for a little treat.

That added up to the perfect opportunity to crack open a bottle of Dubliner Irish Whiskey with Honeycomb Liqueur.  Legally speaking, this isn't a whiskey. It is below the 40% ABV (80°). While there's no age statement, because it is a liqueur, it doesn't have to meet Irish whiskey standards. It also has, if I had to guess, way beyond the allowable limit of E150A caramel coloring for Irish whiskey. What's the allowable limit? That's a fair question. An amount or percentage isn't specified, but the rule is that it can only affect color and not the flavor.

Produced by The Dublin Liberties Distillery, and packaged at 30% ABV, you can expect to pay about $20.99 for a 750ml bottle. There is no indication of what the various percentages are of each ingredient (whiskey, honeycomb liqueur, and caramel coloring), and I'm not entirely sure it matters.

Before I get started with the review, I'd like to thank The Dublin Liberties for providing me a sample in exchange for a no-strings-attached, honest review. Time to #DrinkCurious and discover what this is all about.

Appearance:  In my Glencairn glass, The Dubliner presented as the color of a new, copper penny. Now, keep in mind, there is caramel coloring added. A heavy, sticky rim was formed, which yielded watery legs that fell back to the pool.

Nose:  An explosion of butterscotch walloped me in the face before I even attempted to take a sniff. Once I managed past it, smells of saltwater taffy, chocolate, and orange candy slices permeated my nostrils. When I drew the aroma into my mouth, that butterscotch bomb returned.

Palate:  I expected this to be sugary-sweet, but instead I was greeted by a soft, airy mouthfeel that offered just a hint of warmth to remind me this was still whiskey-based. Butterscotch discs and pecan started things off, which gave way to caramel and white chocolate on the middle. The back featured honey and cinnamon.

Finish:  Sweet with honey, pecan, and white chocolate, the dusting of cinnamon at the end seemed near-perfect. It was a longer finish than I anticipated, especially considering the 60°.

Bottle, Bar, or Bust:  Cutting to the chase, I loved it. So did Mrs. Whiskeyfellow. The nose sucks you in, the palate convinces you, and the finish just makes you smile. Would this make a great cocktail base? Probably. Am I making a cocktail with it? Not likely, because I don't see the point of going beyond a neat pour. This is delightfully sweet, but not overpowering, and perfect for a hot summer's day. In fact, I'd declare this one of those dangerous drinks, one you can drink several pours before things sneak up on you. With or without the low price, it a very easy Bottle rating. Cheers!