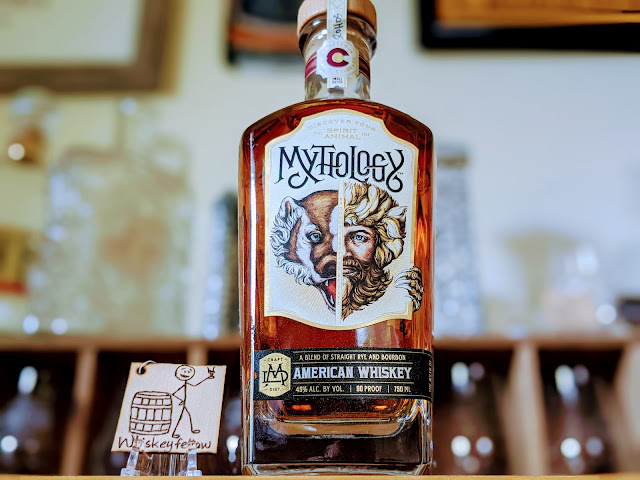 Colorado is known for many things. Gorgeous mountains, snow skiing, whiskey, beer, wine, and professional sports teams. Oh yeah, there's also that other Rocky Mountain "high" people can experience. I mention that because when I read what a Hell Bear was, it requires some pharmaceutical assistance to imagine.

"…. A Colorado prospector ventured into darkness. In the mine, he heard a loud snap– then he was falling! In a daze, in pitch black, he awoke, face-to-face with a unique creature– part bear, part badger. Resolved that today wouldn’t be his last, he rose and followed the glow of the creature’s eyes. The Hell Bear guided the explorer to the surface, then vanished back into the mine."  Mythology Distillery

So there you have it - a Hell Bear!  Mythology felt the story was inspirational enough to name one of its whiskeys for it, an American whiskey that is a blend of three whiskeys:  A 2-to-3-year Rye with a mash of 95% rye and 5% malted barley, a 4-year Bourbon with a mash of 60% corn, 36% rye, and 4% malted barley, and a 5-year wheated Bourbon, made from 68% corn, 20% wheat, and 12% malted barley. The actual percentages are undisclosed.
Because of the blend, it carries a two-year age statement.  If you're interested in learning more about Mythology Distillery, I'll invite you to read my review of its Best Friend Bourbon. At 90°, you can expect to pay around $49.00 for a 750ml bottle.
Before I get to my tasting notes, I'd like to thank Mythology Distillery for providing a sample of Hell Bear in exchange for a no-strings-attached, honest review.  Shall we #DrinkCurious?
Appearance:  Poured neat in my Glencairn glass, Hell Bear presented as a bright, orange-amber. It made for a thin rim and thinner, slow legs that dropped back to the pool of liquid sunshine.
Nose:  Rye and cinnamon were easy to pick out. More challenging were apple, corn, and sweet dough. When I drew the vapor into my mouth, floral rye danced across my tongue.
Palate:  A bit unexpected, the mouthfeel was thick, oily, and heavy. It filled my mouth.  On the front, I found caramel, cinnamon, and baking spice. The middle offered vanilla, roasted almond, and corn. Flavors of white pepper, rye, dry oak, and tobacco leaf were on the back.
Finish:  Dry oak, vanilla, white pepper, and tobacco leaf provided a long-lasting finish.
Bottle, Bar, or Bust:  Hell Bear drinks rye-heavy, which makes me suspect it is the largest portion of the blend. Yet, the Bourbon portion was easy to discern. The mouthfeel was inviting. I enjoyed how unusual yet uncomplicated this whiskey was and am happy to crown Hell Bear with a Bottle rating. Grab one, you won't regret it. Cheers!
My Simple, Easy to Understand Rating System