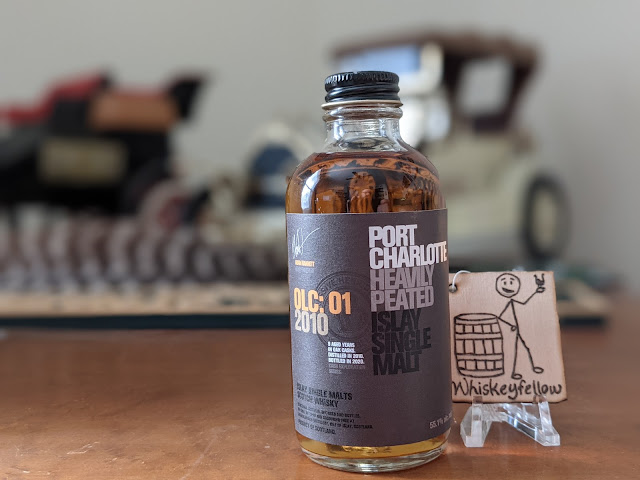 Experimental whiskies are something I find exciting. It really doesn't matter if it turns out good or bad, because I love it when a distiller does something outside the box. Obviously, my hope is that things would turn out good (or great). But I'll try any experimental whisky to see what was done.

The fun happens when a distillery is fully transparent about what it tried. That's something Bruichladdich is known for. If you visit its website, they'll tell you pretty much everything you'd want to know, to the point where even a whisky geek will, if you'll excuse the pun, geek out.

Port Charlotte is Bruichladdich's heavily-peated brand (with Bruichladdich as its unpeated lineup, and Octomore as its super-peated brand).  I've reviewed some from each of the expressions, and for me to be truly transparent, I'm a fan of Port Charlotte. As such, when Bruichladdich sent me a sample of OLC:01 2010 to review, I was intrigued. I'd never heard of it, and had no idea what to expect.

What I learned is OLC:01 is part of Port Charlotte's Cask Exploration Series, which is an experimental line of single malt Scotches. It starts with a 2009 harvest of 100% Invernesshire malted barley. Once distilled, it was then aged from 2010 to 2018 in first- and second-fill ex-bourbon barrels, first-fill Vin Doux Naturel barrels, and second-fill Syrah wine barrels. Once that's done, it was then transferred to first-fill Fernando de Castilla Oloroso sherry hogsheads where it rested for another 18 months.

"These Oloroso hogsheads are superb casks. They're smaller than your average butts. So they've quickly left a lasting impression on this complex single malt." - Adam Hannett, Master Distiller

It is non-chill-filtered, naturally colored, and has a 40ppm phenol rating, which is something you'd expect with Port Charlotte. Bottled at 55.1% ABV (110.2°), it carries a nine-year age statement and you can expect to pay around $124.99 for a 750ml.

The big question, of course, is, How did this experiment turn out? That's answered by a simple tasting, and I'd like to thank Bruichladdich for sending me the sample in exchange for a no-strings-attached, honest review.

Appearance:  In my Glencairn glass, OLC:01 presented as a soft mahogany color with an amber tinge. It formed a medium ring that created slow, medium-thick legs that dropped back to the pool of liquid sunshine.

Nose:  This was an extremely fragrant Scotch. As I allowed it to breathe, the aroma of barbeque filled the room. When I went to nose it, I smelled peat, plum, cherry, apricot, apple, honey, and chocolate. Yes, it seemed like I was in an orchard with a bit of smoke in the air. When I drew the vapor into my mouth, I picked out honey and milk chocolate.

Palate:  The mouthfeel was thin and very oily. My first sip consisted of a peat bomb - more than anything I've had from either Port Charlotte or Octomore. Once I got past the palate shock, the second sip had amazingly muted the peat. Orange, apricot, and peach were at the front. The middle offered flavors of honey, date, and vanilla. On the back, I tasted tobacco leaf, clove, and citrus.

Finish:  A medium-long finish started with citrus, smoked salt, tobacco leaf, and black pepper. One thing to note is this Scotch drinks at its stated proof, and that was eye-opening.

Bottle, Bar, or Bust:  I was happy when I smelled the typical Port Charlotte barbeque but it was missing from the palate. I was shocked with how heavy the punch of peat was and how quickly it dissipated. I expected fruit, yet not the entire orchard on the palate. Finally, this may have been the "hottest" Scotch I've ever had, and I've tried plenty of cask-strength offerings. All of this makes for a unique drinking experience, and I believe that makes OLC:01 well worth the price tag. Obviously, this one earns my Bottle rating. Cheers!