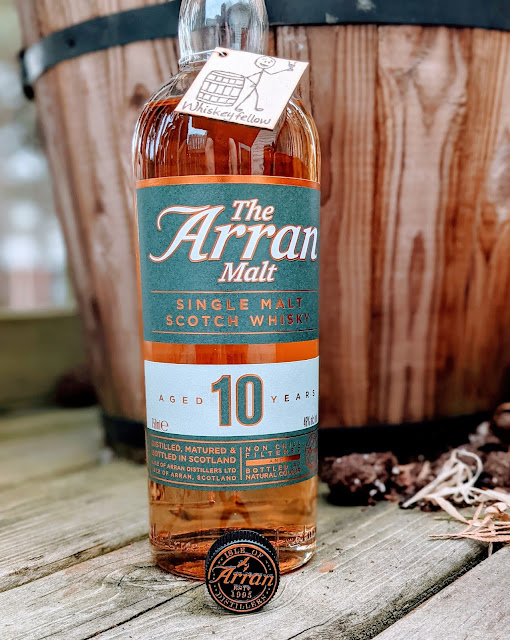 Scotch distilling is an old, respected trade. Many distilleries go back a couple hundred years. Just off the west coast of Scotland is the Isle of Arran, a pair of distilleries stand, busily cranking out whisky.  But, Isle of Arran Distillers is a relative newcomer - it wasn't erected until 1995!
Way back when, the island was home to over 50 distilleries, but they're long and gone. Most were illegal operations, with a handful were on the up and up. But, for whatever reason, they all folded. Construction on this new distillery started in 1994 but was quickly shut down. Of all things, it was a pair of golden eagles that decided to nest. Once the eagles vacated, construction resumed and the Lochranza Distillery opened. Most recently, they opened a second location called the Lagg Distillery.  Due to its location, it is considered part of the official Highland region (and the unofficial Islands region).
Arran Distillers is part of a shrinking breed of independently owned Scotch distilleries. Its Production Director (which most folks would call a Master Blender or Master Distiller) is James MacTaggart. He's been there 14 years, and prior to that, he was at Bowmore just over three decades.
Most of what Arran produces is unpeated single malt whisky, is non-chill filtered, and naturally colored. Also interesting is that nearly everything is 46% ABV (92°). It is said one thing that makes Arran special is the quality of water it utilizes. It is uniquely sourced by Arran.
Today I'm reviewing one of its core products:  The Arran Malt 10. The malt is a blend of Optic (the most commonly used for distilling) and Oxbridge (fairly new to the distilling world) barleys. As you can likely gather, it has been aged at least a decade before being bottled. You can expect to pay about $49.99 for a 750ml package. I purchased my bottle locally in Wisconsin.
Let's #DrinkCurious and learn what this pour is all about.
Appearance:  In my Glencairn glass, Arran 10 presented as clear and pale gold in color. I found it left a medium rim and sticky legs that had difficulty making their way back to the pool of whisky.
Nose:  Strong, sweet notes permeated the air long before I engaged my nose with the glass. Honey, vanilla, lemon curd, and grass were joined by definitive malt. When I inhaled the vapor into my mouth, the honey and vanilla were even bolder.
Palate:  The mouthfeel offered a medium body and had a zing of warmth. On the front of my palate, I tasted orange and apricot, along with a classic maltiness. The middle became vanilla and lemon curd. That transformed on the back to spiciness with cinnamon, chocolate, oak, and leveled out with almond.
Finish:  Slow, rolling, and building, the finish included chocolate and oak from the back, honey, and black pepper. The honey and black pepper played off one another. Once the finish hit a crescendo, it simply vanished.
Bottle, Bar, or Bust:  If you only drink peated Scotch, Arran 10 isn't for you. There's none of it, not even a hint. But, if fruit is your jam, Arran will make you smile. There was enough spice on the tail end to offset the sweet and tart fruits. I found the price to be very fair, and I believe I made a great decision picking up this addition to my whiskey library, and you will as well. On the BBB scale, this one takes a strong Bottle rating. Cheers!
My Simple, Easy to Understand Rating System:
Posted by Whiskeyfellow at 6:00 AM