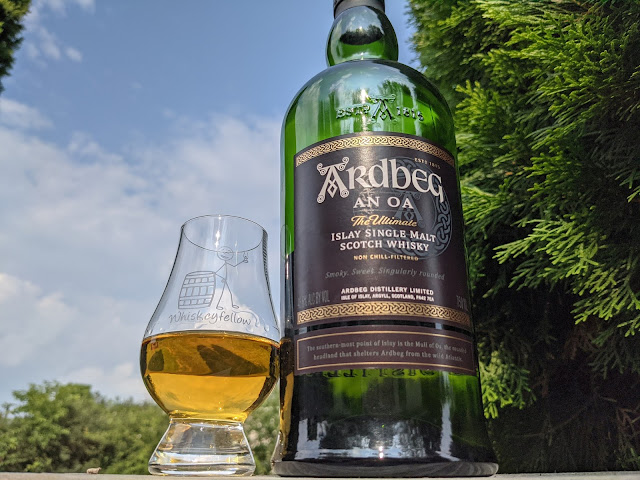 As I peruse my whiskey library, deciding on what to sip on, I'm sometimes stunned with what I have that I've not yet reviewed, especially as it pertains to my Scotches. And, from that, especially when it comes to anything Ardbeg.
Full disclosure:  I am an Ardbeg fanboy. It doesn't mean I love everything out of that distillery, but it does mean given the choice between an unknown Ardbeg and an unknown pretty much anything else, I'm choosing the Ardbeg. I've experienced a loser or two (think Auriverdes).
Today I've chosen one of the core Ardbeg expressions:  An Oa.  Pronounced an oh, it is named for the southernmost point on Islay, the Mull of Oa. Made from a mash of 100% malted barley from Port Ellen, it offers the typical Ardbeg 50-55 PPM level of peat, carries no age statement, is non-chill filtered and naturally colored. An Oa is aged in former first-fill Bourbon barrels, PX sherry casks, and virgin, charred oak.  The vatting (or where the whisky from these various barrel types) happens in French oak. An Oa requires little effort to find and you can expect to lay down about $59.99 for a 750ml package.

"The water we use to produce Ardbeg comes from Loch Uigeadail, 3 miles up the hill behind the Distillery. The water flows down the hill and runs into Loch Airigh Nam Beist – from there the burn takes it to Charlie’s Dam at the Distillery and from there it is piped into the Mash House." - Ardbeg

Now that you know the background, it is time to #DrinkCurious and learn if this expression is worth the investment. For the record, I purchased this bottle from a Wisconsin retailer.
Appearance:  Poured neat in my Glencairn glass, An Oa presented as dull gold in color. It formed a medium-thick rim that created heavy, wavy legs that crashed back into the pool of liquid sunshine.
Nose:  If you think Ardbeg and you expect a blast of peaty smoke in your face, you're going to be disappointed with An Oa. Instead, I found aromas of sweeter peat, light tar, coconut, peach, and vanilla. When I took the vapor into my mouth, all I could sense was stewed peaches.
Palate:  The mouthfeel of An Oa was creamy.  The front of my palate picked out milk chocolate, tobacco leaf, and peanuts. As the liquid moved its way across my tongue, I tasted peach, nutmeg, and cinnamon on the middle, then a punch of dry oak, joined by tar, plum, ginger, and brine on the back.
Finish:  Medium in length, this is one of the shortest finishes out of Ardbeg that I can recall. There was smoke, but it was akin to roasted ancho chile pepper than anything else. The tar and dry oak remained, as did the plum, chocolate, and nutmeg. But, I also experienced clove right before everything fell off.
Bottle, Bar, or Bust:  If you were new to peated Islay scotch and curious about a toe-dipping point, An Oa would be a good choice. While it is heavily-peated, it isn't peat-heavy. The peat is subdued, the stronger notes come from wood. I didn't identify anything except possibly the plum that hinted at PX sherry casks, which is a shame, but overall this is a well-balanced, easy-to-drink whisky. At the same time, an experienced Islay lover won't find anything to complain about. When the price is considered, this is one of those slam-dunk Bottle ratings. Cheers!
My Simple, Easy to Understand Rating System
Whiskeyfellow encourages you to enjoy your whiskey as you see fit but begs you do so responsibly.
Posted by Whiskeyfellow at 6:00 AM