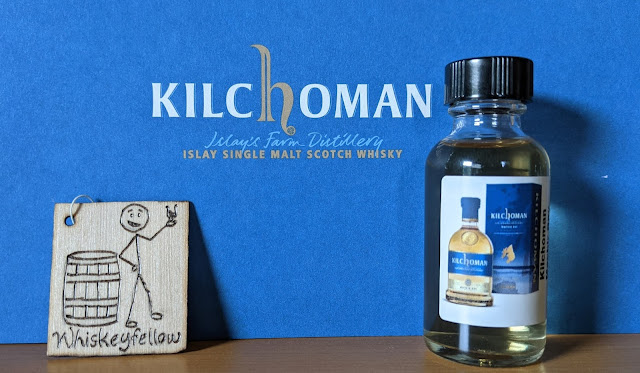 Lately, I seem to be craving peated whiskies. I can't explain why... I mean, I know I'm not pregnant, and I don't think that I'm missing anything in my diet... but that smoky quality is just something I'm gravitating to whenever I have a choice.
I've been blessed recently with incoming samples of Scotches I've never tried. Today, it is a distillery I've never tried:  Kilchoman.  This is one of nine working Islay distilleries and is located on the northwest coast. Founded in 2005 by former independent bottler Anthony Wells, this distillery has the smallest still of any on the island and one of the smallest in all of Scotland. It claims this gives it better contact with the copper and adds to the whisky's flavor.
Kilchoman is Scotland's first single-farm distillery (Rockside Farm) and uses only 100% Islay-grown barley.  Its best-known single malt is Machir Bay. With a peat level of 50ppm and a mashbill of 100% malted barley, it is non-chill filtered and naturally colored.

"Named after one of the most spectacular beaches in Islay, Machir Bay is the flagship of our range. Matured predominantly in bourbon barrels, it balances classic Islay peat character with caramel, vanilla, and citrus sweetness." - Kilchoman

As indicated above, most of the cooperage is former Bourbon barrels, specifically from Buffalo Trace. The remainder is Oloroso sherry butts from Jose y Miguel Martin. It carries no age statement and is bottled at 46% ABV (92°).  You should expect to pay in the neighborhood of $59.00 for a 750ml package.
Before I get to the tasting notes and final verdict, I'd like to thank Impex Beverage for providing me a sample in exchange for a no-strings-attached, honest review. And now, it is time to #DrinkCurious.
Appearance:  Served neat in my Glencairn glass, Machir Bay was the color of golden straw. It established a rather thick rim and left weighty legs that quickly fell back to the pool.
Nose:  When I first poured the whisky into my glass, I could have cut the smoky peat with a knife. But, after allowing it to breathe for about ten minutes, that smokiness transformed to sweeter, mild peat. It was joined by honey, apple, pear, and citrus. When I breathed in through my mouth, I found thick vanilla.
Palate:  An oily, medium-bodied mouthfeel featured vanilla, honey, pineapple, and orange peel on the front of my palate. As it moved to the middle, rich butterscotch, cherry, tobacco leaf, and brine tangoed with one another. Then, on the back, I tasted a blast of charred oak from the Bourbon barrels, black pepper, clove, and a hint of leather.
Finish:  The finish was long, long, long.  It commenced with deep smoke that went beyond char. Black pepper, clove, a certain earthiness, and something herbal joined it. The herbal portion lasted the longest, and when it finally fell off, there was one more kiss of smoke.
Bottle, Bar, or Bust:  I'm not a big fan of the astringent flavor some Scotches have, and thankfully, Machir Bay lacks any of that Band-Aid quality. I also found this Islay whisky to be atypical. The herbal essence was the kicker. At first, I thought it was like tar, but after other sips, it became obvious it wasn't.
I can't believe I've waited this long to try Kilchoman. Now I want to kick myself. I enjoyed this immensely, and when I take into account the affordability aspect, this becomes a very easy Bottle rating. Cheers!
My Simple, Easy to Understand Rating System
Whiskeyfellow encourages you to enjoy your whiskey as you see fit but begs you do so responsibly.
Posted by Whiskeyfellow at 6:00 AM