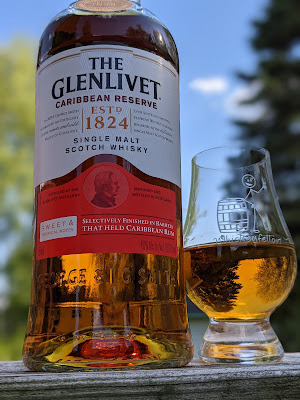 If you've heard anything about Scotch, you've likely heard of The Glenlivet. I say that with some authority as it is the #1 best-selling single malt Scotch in the United States and the #2 best-selling in the world overall.
The Glenlivet has a storied history. Established in 1824, this Speyside distillery was started by George Smith. According to The Glenlivet, in 1822, King George IV wound up in Scotland and asked Smith if he could part with a pour or so of his illegal, but still respected Glenlivet whisky. Smith was no dummy and gave the king what he requested. Two years later, Smith applied for the first legal distilling license in Glenlivet Parish. About a decade later, Smith was distilling almost 200 gallons weekly, which naturally caught the attention of his competition.
In 1871, Smith passed away, and his son, John Gordon Smith, stepped up to continue operations. The competition decided they were going to also call themselves Glenlivet, and Smith, a former lawyer, successfully obtained the exclusive rights in 1884 to have his whisky called The Glenlivet. The distillery has been running continuously sans a hiatus during World War II.
Recently, Mrs. Whiskeyfellow picked up a bottle of The Glenlivet Caribbean Reserve, a single malt Scotch that touts it is selectively finished in barrels that held Caribbean rum. What selectively finished means is that only a portion of the whisky was finished, the rest aged normally. She paid about $29.00 for it, making it an easy, low-risk purchase. It carries no age statement, no indication if it is chill-filtered or not, and without any suggestion that caramel coloring was used or avoided. It is bottled at 40% ABV (80°).

"To create whisky with a tropical feel, our makers finished a portion of our smooth whisky in barrels that previously held Caribbean rum. The result is a well balanced and exceptionally smooth whisky. Single malt, meet summer." - The Glenlivet

I'm unsure if this was a purposefully limited production or if sales didn't meet expectations, but Caribbean Reserve was introduced in 2020 and appears nowhere on The Glenlivet website. The bottle my wife procured was produced May 2020, which tells me at the very least the store wasn't selling these like hotcakes.

Of course, I try everything that I can when it comes to whiskey. That's all part of the #DrinkCurious lifestyle. Disappointing sales or someone's negative opinion doesn't shy me away. We all have different expectations and desires to make us happy.

Without further ado, it is time to dissect this whisky and discover what Caribbean Reserve is all about.

Appearance:  Served neat in my Glencairn glass, Caribbean Reserve suggested a brassy amber appearance. It formed a very heavy rim that left sticky droplets that crawled back to the pool.

Nose:  I expected rum notes to dominate. They didn't. Instead, it was very malt-forward, with undertones of honey, orange citrus, and apple cider. When I took the vapor into my mouth, vanilla and brown sugar slid across my tongue.

Palate: Caribbean Reserve had a full-bodied, creamy mouthfeel. While it filled my mouth, strangely it wasn't coating. The first thing I tasted was coconut, lemon, banana, and honey. Mid-palate, flavors of brown sugar, vanilla, raisin, and pineapple were fairly easy to discern. On the back, I discovered clove, cinnamon, and chocolate.

Finish: Most of the finish was medium in length. A hint of wood was accompanied by apple cider, brown sugar, clove, and banana. What lasted much longer was toffee.

Bottle, Bar, or Bust:  What will Caribbean Reserve not do? If you're looking for something to compete with, say, The Balvenie 14 Caribbean Cask, this will fall short. It is also obviously younger. But, Caribbean Reserve is also more than half the price. What this will provide is an affordable, tasty, whisky that performs as advertised - an easy-sipping Scotch to be enjoyed on a hot, summer's day. I'll give it a Bottle rating, I believe it is worth that. Cheers!

Whiskeyfellow encourages you to drink your whiskey as you see fit, but begs you to do so responsibly.