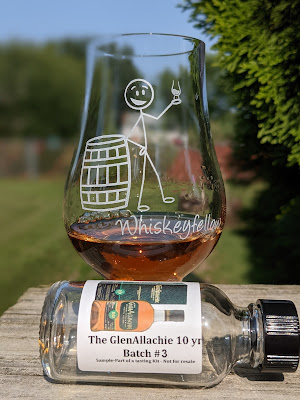 This year, I'm discovering distilleries that I've known about, but not yet had a chance to peruse. For me, this is always exciting, and somehow much more so than new releases from distilleries I'm already a fan of. I think part of it is because I may find something that drags me in an entirely new direction in my whisky journey.
The GlenAllachie (pronounced Glen-Alla-Key) is a fairly new Speyside distillery that's seen quite a bit of ownership changes in its 54 years. Founded in 1967, its been open, closed, mothballed, reopened, used for strictly blends for Chivas Bros., then sold off in 2017 to its current owners, The GlenAllachie Distillers Company, run by Billy Walker, Trisha Savage, and Graham Stevenson. Walker is its current Master Blender.
The GDC completely revamped things with a plan to release whiskies bottled at no less than 46% ABV, and are both naturally colored and non-chill filtered. It also allows 160 hours of fermentation time, claiming it gives them greater time to study what's in the tank.
Today I'm reviewing GlenAllachie 10 Year, Batch 3.  Because I can do basic math, I'm able to tell you that The GDC didn't distill this whisky, this is one of those leftover barrels from the Pernod-Ricard/Chivas ownership. This is a single malt that's been aged for at least a decade in Oloroso sherry, PX sherry, and virgin oak casks. Weighing in at an impressive 58.2% ABV (116.4°), there were 3500 cases released in 2019. You can expect to pay around $81.99 for the bottle.
Before I get to the review, I'd like to thank Impex Beverage for providing me a sample of this Scotch in exchange for a no-strings-attached, honest review. Now, allow me to #DrinkCurious and tell you all about it.
Appearance:  Poured neat in my Glencairn glass, GlenAllachie 10 presented as the color of deep, dark mahogany. It formed a paper-thin rim and thick, heavy tears that fell back into the pool of liquid sunshine.
Nose:  Aromas of gingerbread, milk chocolate, raisin, fig, and date made me smile. When I drew the vapor into my mouth, brown sugar and molasses crawled over my tongue.
Palate:  Full-bodied with a syrupy texture, the front of my palate tasted caramel, fig, and cinnamon. The middle offered raisin, buttercream, and cocoa powder. Then, on the back, freshly-cracked peppercorn, dry oak, and tobacco leaf.
Finish: The finish was medium-long in length and bone dry. Were I to guess, that would indicate there were more Oloroso sherry casks and virgin oak used than PX sherry casks. Brown sugar, cocoa powder, and cinnamon spice blended together and when they fell off, raisin was left behind.
Bottle, Bar, or Bust: I'm stuck somewhere between a Bottle and Bar rating. The aroma was absolutely enticing. The palate was good, but not what I would describe as great. I would have preferred more of the PX sherry influence to come through versus the Oloroso, but that's not the end of the world. The price isn't obnoxious, there are just so many 10-year Scotches out there for a lot less. When I'm stuck between ratings, I always opt for the lower, and that means this one takes a Bar.  Cheers!
My Simple, Easy to Understand Rating System
Whiskeyfellow encourages you to enjoy your whiskey as you see fit but begs you do so responsibly.
Posted by Whiskeyfellow at 6:00 AM