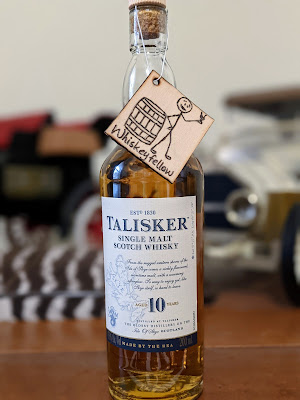 Peated Scotch is most associated with Islay. However, peat is used to heat malted barley in each of Scotland's five regions. That statement, of course, leads to much discussion - does Scotland have five or six regions?  Officially, there are five, according to the Scotch Whisky Regulations. Those are Speyside, Highland, Lowland, Islay, and Campbeltown. The sixth is unofficial, called Islands, which includes every Scottish island sans Islay.
One of those islands is called the Isle of Skye. Until very recently, there was one and only one distillery on Skye, and that is Talisker. But, there's a newer one called Isle of Skye Distillery, but it currently produces gin.  Talisker was founded in 1830, it remained productive until 1960 when a fire destroyed it. The owners quickly rebuilt, going as far as to duplicate the original stills, and then resumed production. It is currently part of the Diageo portfolio.

"From the rugged western shores of the Isle of Skye comes a richly flavored, maritime malt, with a warming afterglow. So easy to enjoy, yet like Skye itself, so hard to leave." - Talisker

Talisker's whiskeys are non-chill-filtered and naturally-colored. Today, I'm pouring Talisker 10, which is conveniently named as it is aged ten years in Bourbon hogsheads. It is a single malt, meaning that it utilizes a single grain from a single distillery. That grain is typically barley.  Talisker 10 is packaged at 45.8% ABV (that's 91.6°), and you can expect to pay about $65.99 for a 750ml bottle. Talisker 10 is fairly easy to get your hands on.
What's this whisky all about? The only way to know for sure is to #DrinkCurious.
Appearance:  Poured neat in my Glencairn glass, Talisker 10 presented as brassy in color. It created a medium rim, but heavy, thick legs that crashed back into the pool.
Nose:  While I allowed the whisky to rest, its sweet, peaty aroma left the glass. When I brought it to my face, the peat was joined with seaweed, brine, a faint astringent, raisin, citrus, nutmeg, and vanilla. Yes, that's a lot of smells going on! As I inhaled the vapor into my mouth, it was malty.
Palate:  The mouthfeel was oily and medium-bodied. On the front, the sweet peat married honey, vanilla, and milk chocolate. Come mid-palate, things got fruity with apple, pear, and green grape. That was joined by malt.  The back consisted of charred oak, clove, and saline.
Finish:  The long finish featured clove, black pepper, smoke, brine, and vanilla. There was no burning sensation to speak of, making it easy to pick out the notes.
Bottle, Bar, or Bust:  There is so much variety from the unofficial Islands region, and, yet, Talisker 10 provides a good representation of its peated whiskies. The peat is definitely there, but it isn't overwhelming, weighing in somewhere between 10-14ppm. That makes it a good entry point for someone who is wary of smoky Scotches. There is no astringent (Band-Aid) quality to it, which some drinkers can find off-putting. When you consider the age and proof along with all of the flavor, this ranks up as a very easy Bottle. Cheers!
My Simple, Easy to Understand Rating System
Whiskeyfellow encourages you to enjoy your whiskey as you see fit but begs that you do so responsibly.
Posted by Whiskeyfellow at 7:27 PM