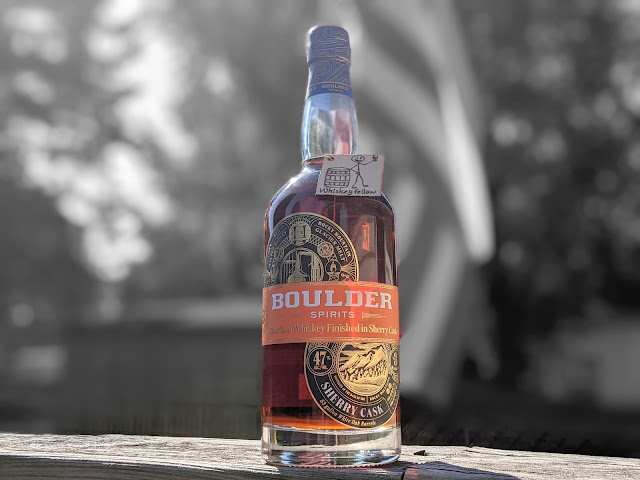 Located in Boulder, Colorado just a mere 5,430 feet above sea level is a distillery called Vapor Spirits, which is also known as Boulder Spirits.  I've been reviewing the rather unique whiskeys from this distillery for the last two years. It definitely does not do "me-too" products. Its distiller, Alastair Brogan, is a Scotsman who believes in doing American whiskey the Scottish way, and the Scottish way involves, among other things, a lot of malted barley. Boulder Spirits uses a 1300-gallon Forsyth copper pot still to distill its whiskeys. On a side note, that's currently the largest pot still in Colorado.
Alastair is an entertaining gentleman. When you talk to him, he's mesmerizing. If you want to read about him, I gave a somewhat detailed history in a previous review. I was shocked as to what he's done and where he's been.

"Barley, yeast, water, oak, and the pursuit of happiness. These make up the foundation of what we here at Boulder Spirits stand on. We’re a small Colorado whiskey company with big dreams, bigger goals, and the biggest pot still in the state. We’re here to make our best versions of American Single Malt Whiskeys, Bourbons, and Gins that our team can." - Boulder Spirits

Today I'm sipping on his Straight Bourbon Sherry Cask. The name doesn't mean this was aged in former sherry casks. That would prevent it from being Bourbon. Instead, it was aged in #3-char new, 53-gallon American oak barrels. But, before we can talk about aging, we have to talk about what's being aged. It starts with a mash of 51% corn, 44% malted barley, and 5% rye.
That concoction is then aged for three years. Once that's happened, it is transferred into ex-sherry casks for another six months. Boulder Spirits doesn't specify what kind of sherry is used, but I suspect it is Olorosso (and I'll explain why in the tasting notes). Boulder Spirits has a recommended price of $55.00 for a 750ml bottle, and it is available in Colorado and a handful but growing number of states.
I'd like to thank Boulder Spirits for providing me a sample in exchange for a no-strings-attached, honest review. Now, it is time to #DrinkCurious.

Appearance:  Poured neat in my Glencairn glass, this Bourbon presents as a red-tinted amber. A medium-thick rim was created, and that released husky, slow legs that fell back into the pool.

Nose:  There's no goofing around here. This was finished in sherry casks and sniffing this is like I shoved my head in the barrel. Honey, plum, apricot, and raisin had me rolling my eyes back in my head. Aromas of ginger and caramel snuck in behind. When I took the air into my mouth, cinnamon raisin bread was all I could think of.

Palate:  Full-bodied with a rich, silky mouthfeel, the Bourbon offered honey, milk chocolate, and char on the front of my palate. The middle tasted of prune, raisin, and dried cherry. The back was more raisin and prune, which was joined by ginger and tobacco leaf.

Finish:  Here's why I think the cask was Olorosso sherry:  it was dry. Very dry. Prune, ginger, tobacco leaf, and charred oak rounded things out, and the finish was long and lingering, leaving a dry but fruity sweetness behind.

Bottle, Bar, or Bust:  Remember how I started off saying Boulder Spirits makes unique whiskeys? The Bourbon Sherry Cask continued that tradition. At times, I felt as if I was eating fruitcake. Not the garbage that gets passed around year after year as a joke at Christmastime, but the good, gooey stuff that folks fight over. If you like sherry-bomb Scotches, you absolutely need to try this Bourbon. If you don't know what a sherry-bomb is, you need to try this Bourbon. The $55.00 investment will bring absolutely no buyer's remorse, and this takes a Bottle rating like a boss. Cheers!