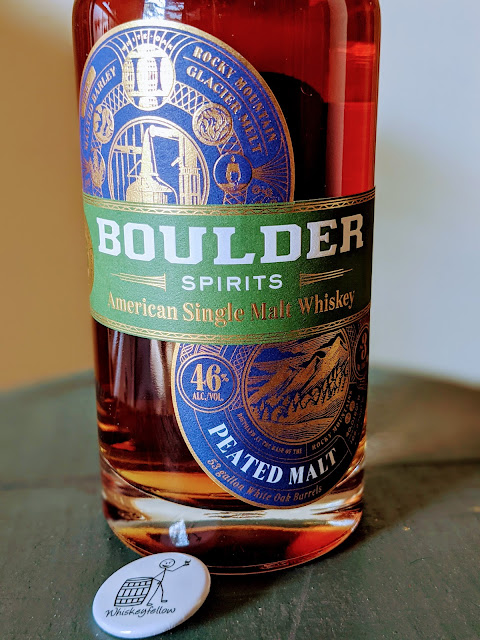 Located in Colorado just a mere 5,430 feet above sea level at the foot of the Rocky Mountains is a city called Boulder. I'm sure you've heard of it. Maybe what you didn't know is that in 1907, Boulder passed an anti-saloon ordinance predating Colorado's own 1917 ban on alcohol. Boulder didn't see another drop until the 21st Amendment was ratified in 1933.
Fast forward a few years to, say, 2007, and you've got Vapor Spirits, also known as Boulder Spirits, founded by a Scottish-born guy who was voted off the island during Survivor: Panama. His name is Alastair Brogan. Before becoming a distiller, before becoming a reality-tv star, he was a Royal Air Force veteran and the vice president of his family's company. He always wanted to make whiskey in his homeland, but for yet another lifetime adventure, he relocated to Boulder, and the rest is history.

"We take traditions from Al’s homeland, along with American ingenuity to find a balance that creates award-winning whiskeys: distillers malted barley, a Scottish pot still, #3 char American White Oak barrels, aged in an arid, high elevation climate, and cut with the celebrated Eldorado Springs water. This is our American Single Malt." - Boulder Spirits

When I planned my return trip to Colorado earlier this month, one of the places I wanted to visit was Boulder Spirits. When I arrived, I learned that I had met Alastair a few years ago in Chicago at the Independent Spirits Expo. I didn't remember that, but Alastair sure did. I apologized, I was tipsy that day and nearly lost my life (I'm joking) drinking Malört.
Boulder Spirits uses a 1300-gallon Forsyth copper pot still to distill its whiskeys. On a side note, that's currently the largest pot still in Colorado.
During my tour, Alastair poured me some of his American Single Malt - Peated. As someone who generally enjoys peated whiskeys, and (again) someone who was impressed with the few peated American whiskeys I tried, this definitely caught my attention. Mrs. Whiskeyfellow was with me, she dislikes peat, and she was a bit enchanted by the smell. I tasted it, I savored it, and Alastair gave me a sample bottle to take home for a review - mostly because I tried several others that afternoon.
The mash, which is 100% malted barley, is blended with the Eldorado Springs water. It is then placed into 53-gallon, virgin #3 charred American oak barrels for three years. Bottled at 46% ABV (because that's how the Scots measure alcohol content, but that's 92° to you and me), you can expect to pay about $55.00 for a 750ml package.  Boulder Spirits is in several states and is expanding into others.
Before I get to my review, I'd like to thank Alastair for both the sample and his hospitality. And now, it is time to #DrinkCurious.
Appearance:  Poured neat in my Glencairn glass, this American Single Malt was an absolute orange-amber in color. It presented a heavy rim that yielded wide, fat legs that crashed back into the pool.

Nose:  The peat was unmistakable, but it wasn't overwhelming. Light smoke was married with plum, strawberry, malt, and toasted oak. When I took the vapor into my mouth, the malt rolled across my tongue.

Palate:  The mouthfeel was oily and full-bodied. I assumed my palate would be greeted with fruits based upon the aromas. Boy was I wrong. Instead, the front featured dark chocolate, pear, and, of course, the lightly-smoked peat. The middle offered coffee, cocoa, and thick, sweet caramel. Then, on the back, it became earthy with oak and clove.

Bottle, Bar, or Bust:  This is a peated American Single Malt. There are so few of these out there that they're special just by existing. But, this one is also delightful. It is lightly smoked. It is sweet. It has flavors that naturally transition from one to another. Even if you don't like peat, this one is something you can work with. It reminded me of something out of the Talisker Distillery in Scotland, of which I've yet to taste something less than wonderful. While the cost of a bottle is about average, there's nothing average about this whiskey. If you see it, buy it. American Single Malt - Peated is a slam-dunk Bottle rating. Cheers!