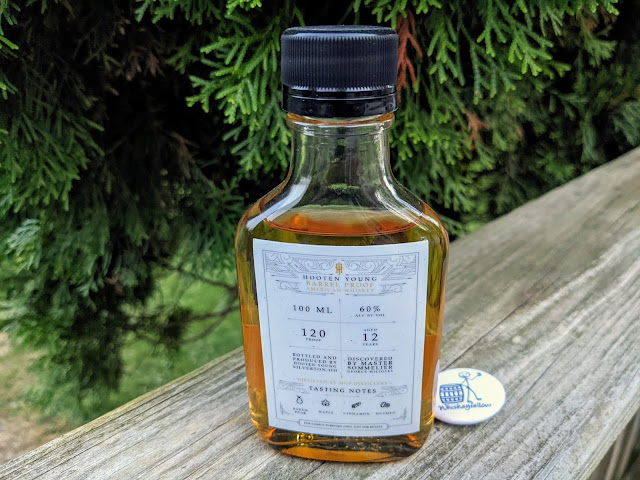 Earlier this summer, I had a chance to review a 12-year American Whiskey from Hooten Young. It was sourced from MGP, made from a mash of 99% corn and 1% malted barley, then aged in second-fill vintage cooperage for that 12-year period.  The backstory of Hooten Young can be found in the above-cited review.

Today I am sipping on the barrel-proof version of this light whiskey (it is considered a light whiskey due to the use of used cooperage and the proof to which it was distilled). It is the same mash and age statement, distilled to 189° and then barreled at 140°.

“The uniqueness of our barrel-proof American Whiskey can be attributed to the 12 years of aging, as well as the second fill barrels instead of using the first fill. Our barrel-proof American Whiskey is a direct and flavorful experience. The spirit at this strength will most certainly command your attention. Beyond its power, there is also a mellowness and richness not often found in barrel proof spirits.” – George Miliotes, Master Sommelier

I wound up rating the 92° version a Bar. I found it interesting and different from other light whiskeys I’ve had (despite most coming from MGP), I just thought it was pricy for what it was. But, every whiskey is held up to the same standard, and a different proof becomes a new experience to be judged with a clean slate.

There were 3000 bottles of Hooten Young Barrel Proof made available at a retail price of $109.99. Distribution is currently in Florida, Colorado, Louisiana, Texas, and Kansas, plus you can buy it online from Hooten Young’s website.

Before I get to the tasting notes and rating, I’d like to thank Hooten Young for providing me a sample of its whiskey in exchange for a no-strings-attached, honest review. Now, it is time to #DrinkCurious.

Appearance:  Served neat in my Glencairn glass, Hooten Young Barrel Proof presented as medium-gold in color. A thin rim was formed, which created fast, heavy legs that crashed back into the pool.

Nose:  Aromas of baked apples, cinnamon, and nutmeg were beyond obvious. It made my mouth water and engaged my interest in getting to the tasting. When I drew the air into my mouth, cinnamon apples rolled across my tongue.

Palate: I found the mouthfeel to be thin and oily. It found every nook and cranny of my mouth. The front offered flavors of baked apple and vanilla. In the middle, I experienced maple syrup, brown sugar, and cinnamon powder. The back was cinnamon Red Hots and clove.

Finish:  I love freight-train finishes. They just go on and on and so long as the whiskey is good, there’s no reason not to savor it. Clove, pepper, and cinnamon remained behind.

Bottle, Bar, or Bust:  I enjoyed what I tasted, it was uncomplicated and easy to sip despite the proof. I’m at the same crossroads that I was with the 92° version, and that’s the value portion. I get that this is 120°, I get that it is 12-years old. If you would have asked me two years ago if I would pay $109.00 for a similarly-aged, similarly-proofed whiskey (such as Knob Creek 120), I’d tell you no way. But, we’re at a time where these older, higher-proof whiskeys can command the higher price. I’m leaning toward a Bottle rating on this one, there’s just enough to push it across the finish line.