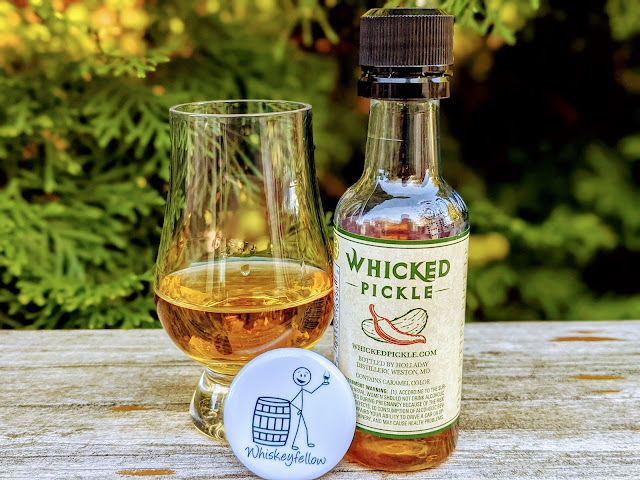 I love pickles. If you asked me what my favorite condiment was, it would be a pickle. I'd gladly take a giant half-sour over pretty much any other snack. When I used to eat Subway, it would be meat, cheese, and then "flood it with pickles." Did I mention I love pickles?

Imagine my surprise when perusing the 50ml section at some random liquor store and seeing a pickle-flavored whiskey!  It was called Whicked Pickle, and it was a slam-dunk purchase.

Whiskey + Wicked = Whicked. That's what Holladay Distillery states. Holladay has an interesting history. Founded in 1856, it is the oldest business in Kansas City, Missouri. It also happens to be the oldest continuously operating distillery west of the Mississippi River still on its original site.

Whicked Pickle is very new to the market. It is currently available in three states and plans for increased distribution.

"This product went from concept to market in a matter of months," said Patrick Fee, the company's Vice President of Marketing. "When the pandemic caused dips in other parts of our business, it allowed us to have some fun with product development."

There's not a lot of information about the whiskey itself, other than it has caramel coloring added and bottled at 35% ABV (70°).  You can expect to pay about $19.99 for a 750ml package.
So, how's this One Stiff Pickle (as Holladay calls it) taste?  I'll #DrinkCurious and find out.

Appearance:  Served neat in my Wee Glencairn Glass, Whicked Pickle's color is gold, but since this has E150 caramel added, that doesn't tell us much. It tried to form a rim but was so watery that it simply collapsed back into the pool.

Nose:  When I cracked the bottle open, the air exploded with the aroma of pickled pepper. It took me a bit to get the glass to my face because it was so overwhelming. Yet, when I finally did that, the pepper was gone and only a residue remained. Vinegar and brine were easy to discern, and then a nuclear bomb detonated, releasing dill fallout. I mean, there was a LOT of dill! When I brought the air into my mouth, the pickled pepper was back.

Palate:  At this point, I was concerned. While I  love pickles, I'm not big on pickled peppers. But, I put my big boy pants on and took the first sip. The mouthfeel was unexpectedly soft, lacking the spice I expected. It started off like eating a pickle, and that was cool. Then, it moved into chewy dill. That wasn't my favorite, but I said to myself, This isn't that bad...

Finish: My father used to eat pepperoncini out of a gallon jar like it was candy. I remember sneaking one from the jar when I was about five or so, because, even then, I was a pickle freak and those were pickled peppers. Dad found out very quickly. He laughed. Mom laughed. My idiot brother laughed. Why? Because I was screaming and crying. The finish tasted exactly like that stolen pepperoncini, and it stuck around a long time (along with the dill). I didn't cry, but Mrs. Whiskeyfellow found the faces I made quite entertaining.

Bottle, Bar, or Bust:  Cutting to the chase, Whicked Pickle was not my thing at all. But, I could see this making someone happy as a shot with a beerback, it could make for a good Bloody Mary. It certainly had the spicy pickle part down. Normally, I'd give something like this a Bust. However, that would be unfair because I'm not into spicy pickles or peppers. I'm making my rating a Bar. You should try this, especially if spicy pickles or pepperoncini are your jam. Cheers!