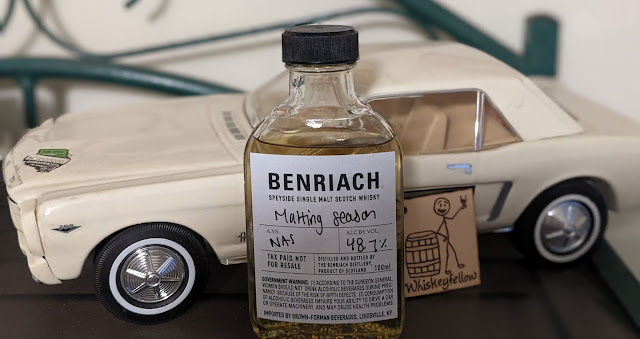 One month each year, the folks at The BenRiach spread barley on its malting floor, watch it carefully while turning it by hand, and pick the “perfect” time to move it to the kiln to dry and stop the germination process.

The BenRiach is a Speyside distillery and is known for doing things in its own way. Dr. Rachel Barrie is one of the most respected master blenders in the business.  And, in 2021, she’s taken a single malt Scotch in an entirely new direction with Malting Season.

“Passed from distiller to distiller throughout the generations, the floor malting process keeps a traditional part of the whisky-making process alive with BenRiach being one of only seven distilleries in Scotland to continue the practice of floor malting.

Distilling spirit from barley malted here on site is a true labour of love and something we are passionate about keeping alive here at BenRiach as an ode to our creative whisky-making heritage.” – Stewart Buchanan, The BenRiach global brand ambassador

It begins with the aforementioned once-a-year malting. A concerto strain of barley, the most common, was used, and in this case, 100% of it came from the malting floor. The distillation took place on November 2, 2012. That single malt new make then aged in two types of casks:  virgin American oak and former Bourbon barrels and rested for nine years. The yield was 6672 bottles, and you can expect to pay about $149.99 for a 750ml package.

Before I get to the review, I’d like to thank The BenRiach for providing me a sample of Malting Season in exchange for a no-strings-attached, honest review. I’ll #DrinkCurious and get to it.

Appearance:  Served neat in my Glencairn glass, Malting Season presented as the color of bright gold. It left a medium-thick rim that led to husky, slow legs that fell back to the pool of liquid sunshine.

Nose:  Honey was obvious. Peach, vanilla, Fuji apple, malt, and raw almond aromas lay beneath. As I pulled the air through my lips, the Fuji apple gained strength.

Palate:  The mouthfeel offered a medium-weight body and was silky. Fuji apple, Bartlett pear, and honey started things off. As the whisky moved to the middle, toasted almond and vanilla took over. Then, on the back was a blend of oak, white peppercorn, and milk chocolate.

Finish:  The oak became dry, the white pepper remained, and then became sweet with honey and apple, then featured a redux of the dry oak. This was one of those big finishes that lasted several minutes.

Bottle, Bar, or Bust:  Malting Season is a stunningly good Scotch. The balanced palate and finish offered a substantial presence with bold flavors. There’s no astringent. There’s no peat. The proof is just right without being unnecessarily diluted. Would I spend $149.99 on this? I believe so, but I’d also like to see it come down about $20.00 or so in price. Regardless, this earned every bit of my Bottle rating. Grab one. This is the first edition of what’s sure to become an amazing annual release. Cheers!