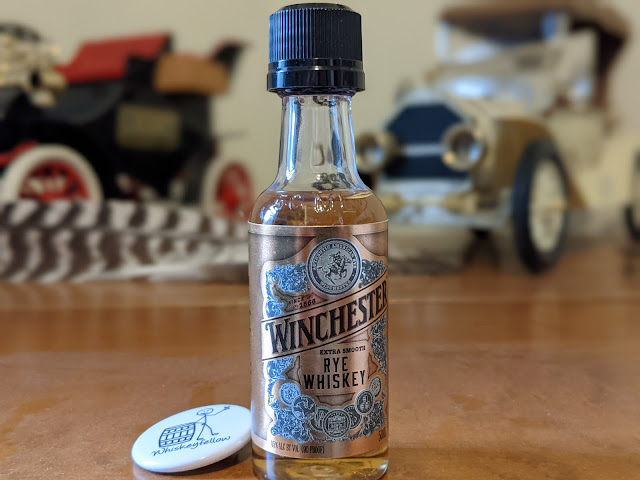 Every so often, I let my excitement over finding something new get in the way of my better senses. When perusing the aisle of a Total Wine & Liquor in Minneapolis, I found a 50ml taster of Winchester Extra Smooth Rye.  I believe it was $1.99, so what did I have to lose?

When I got back to my whiskey library and updated my inventory, my heart sank. I saw that the distillery was TerrePURE.  What’s TerrePURE?  Well, it has created a method using sound waves to hyper-age whiskey. I’ve been down this road with them before, once with their OZ Tyler Bourbon, and again with the OZ Tyler Rye. Here are my two ratings:

As it turns out, TerrePURE moved operations to North Charleston, South Carolina, so perhaps OZ Tyler recognized its brand was being ruined and kicked them out. Or, it could have been something else.

Here I sit, glass in hand, trying to remind myself that I have a #DrinkCurious lifestyle and everyone deserves a second (or third) chance.

Winchester Rye is aged six months in new oak. It doesn’t say “charred,” although you can assume as much to hit the rules with the TTB. It is bottled at 90°, and a 750ml can be acquired for $24.99 at Total Wine. The brand wants to let you know that in 2015, it won a silver medal from the San Francisco World Spirits Competition.

Does that win translate for the hope that there was some improvement? I can divulge that I lived through the experience because you’re reading the review.

Appearance:  Poured neat in my Glencairn glass, Winchester Rye presented as the color of gold. It formed a thick rim that made a curtain to fall back to the pool.

Nose:  I had to double-check the bottle to ensure that it didn’t say Listerine on it somewhere. A giant blast of menthol and mint struck me in the face. Dill and green oak followed after many attempts to get past it. Nervously, I took the air into my mouth, and the menthol and mint permeated all over.

Palate:  At this point, Mrs. Whiskeyfellow was humming to herself. I asked what was up (to delay the inevitable), and she indicated she enjoyed the show and the sounds I was making and pointed out that I hadn’t even tasted it yet. Well, that only wasted a few additional seconds. I sucked it up and took a taste. The mouthfeel was thin, and the palate was painfully young with mint and citrus. I sipped it again, hoping this was simply palate shock, and I was incorrect.

Finish:  Miracles do happen. The finish was about as short as I’ve ever experienced. There was a hint of caramel, then more mint and citrus.

Bottle, Bar, or Bust: The TerrePURE process is still horrific as this godawful Rye proves. Usually, I suggest what may improve things on a whiskey I don't like. There's no salvaging this. Long story short, Winchester Extra Smooth Rye is the worst thing I’ve tasted in 2021 and is a Bust.

Posted by Whiskeyfellow at 12:30 AM