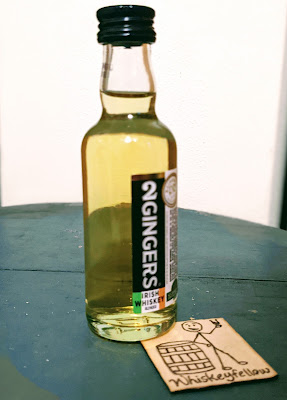 Irish whiskey is a special category of whiskey. It used to be the most popular in the world until Prohibition in the United States nearly destroyed it. It is smooth (a word that some people hate), soft, and fruity. And, for the most part, they’re affordable, especially compared to their Scottish counterparts.

One of the things that make Irish whiskey so smooth is that they are typically triple-distilled. It doesn’t have to be; it is just the standard. As such, when Irish whiskey is twice-distilled, that’s unusual and is owed attention.  Such is the case with 2 Gingers.

2 Gingers began as the dream child of Kieran Folliard. Folliard owned a few Irish pubs and created some famous cocktails using Jameson Irish Whiskey. At some point in 2011, he started sourcing barrels from the Kilbeggan-Cooley distillery. He named his brand after his red-headed mother and aunt. Folliard did so well that he garnered the attention of Beam-Suntory, who, just one year later, purchased the brand from Folliard.

2 Gingers is an Irish Blended Whiskey, which means it marries two or more types of Irish whiskey. With 2 Gingers, single malt and single grain distillates are involved. It is aged four years in former Bourbon casks, although there’s no indication if that’s first-fill or refill or a variety. It is then packaged at 40% ABV (80°), and you can find a 750ml bottle for just over $20.00, and it is a cinch to find.  For the record, I found and purchased a 50ml taster at a liquor store in Minneapolis.

That price point is also attractive.  A $20.00 Irish whiskey still becomes a candidate for my #RespectTheBottomShelf award. Will 2 Gingers earn one? The only way to tell is to #DrinkCurious.

Before I do that, I would be remiss not to mention that 2 Gingers is designed to be a mixer. If you’re familiar with my reviews, you’ll know that I won’t buy whiskey as a cocktail base; I expect any whiskey to stand on its own, or at the very most, with a few drops of water. I’ve had several “mixer” whiskeys that were delightful sipped neat.

Appearance:  Poured neat in my Glencairn glass, 2 Gingers showed as the color of golden straw. It formed a thick rim that created sticky, slow legs.

Nose:  I found the aroma to include malt, lemon zest, green apple, apricot, and toasted oak. When I took the air into my mouth, a strong banana presence appeared.

Palate:  The mouthfeel offered a medium body. Things began with honey, apple, and malted barley on the front, ginger root, vanilla and lemon peel on the middle, pepper, dry oak, and milk chocolate on the back.

Finish:  The finish was weird and not in the good/unusual way that I crave. Instead, it started as banana cream, then got spicy with pepper and dry oak, culminating in something slightly bitter. I was cool until that bitter part.

Bottle, Bar, or Bust:  2 Gingers is nothing special and certainly not a means to #RespectTheBottomShelf. I realize that this whiskey is designed to be a mixer, but I’ve had others marketed for mixing that taste just fine neat. This was not one of them. I’m not sure where to even provide suggestions.  Is it proofed too low? Perhaps. Is it lacking time in wood?  Probably not, considering how dry the wood notes are. Does it need to be triple rather than twice-distilled? Probably. 2 Gingers may be dirt cheap, but it is also taking a Bust rating from me. Cheers!