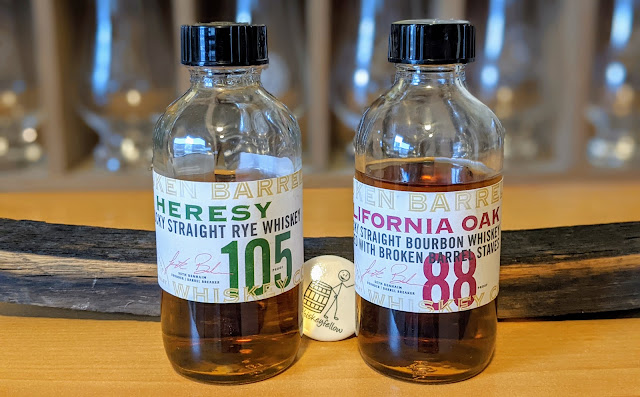 Earlier this year, I had an opportunity to review two Bourbons from Infuse Spirits. Both earned my Bottle rating, and you can read more about that here.

Infuse Spirits’ founder and master distiller, Seth Benhaim, took aged whiskey from an undisclosed number of casks and transferred it to large, stainless steel tanks. Seth then took broken staves and placed them inside the tanks, believing that the whiskey would interact with a larger surface area than a barrel could accomplish.  Thus, the Broken Barrel Whiskey brand was born.

“Though it is often debated, we HOLD FIRM that barrels INFLUENCE roughly 80% of the final flavor of a whiskey. The Notes and character created from contact with oak are what shape the whiskeys we love and enjoy.” – Seth Benhaim

Today, I’m sampling California Oak Kentucky Straight Bourbon and Heresy Kentucky Straight Rye. Both came from Owensboro Distilling Company and rested in charred oak before the broken staves were added. Seth calls this his signature oak bills. Neither carries an age statement, but we know they're both at least two years old because both are straight whiskeys.

I’m grateful to Infuse Spirits for providing me samples of both in exchange for my no-strings-attached, honest reviews. Let’s see how these turned out – let’s #DrinkCurious. Nose: The wine influence was unmistakable; it was jammy with plum and cherry. I found a faint aroma of tangerine, which disappeared into the French oak. I drew the air into my mouth, and that plum and cherry danced across my tongue.

Palate:  On the front of my palate, I tasted vanilla cream, coffee, and almond. The middle featured cherry, plum, and cinnamon, while the back offered French oak and freshly-cracked black pepper. Its texture was silky with a medium weight.

Finish:  California Oak had one of those freight train finishes. It seemed unstoppable, barreling through with French oak, black pepper, and cherry.

Bottle, Bar, or Bust:  First and foremost, 88° was plenty for this Bourbon. There were bold flavors that stood out unmuted. If it were any higher, even a few points, my concern would be the spice notes, in particular, would be overwhelming. The nose was enticing, the palate enjoyable, and that Energizer bunny finish was satisfying. For $35.00, this isn’t going to break anyone’s pocketbook; there’s not a reason it shouldn’t take a Bottle rating. 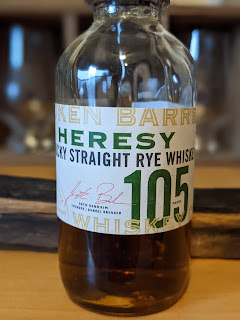 Nose: Sherry may have made up only 20% of the oak bill, but it's evident on the nose.  Raisin, cherry, and apricot led to nutmeg, char, mint, and floral rye. As the vapor entered my mouth, a wave of vanilla rolled across my palate.

Palate:  A soft, buttery mouthfeel (which, considering the proof, shocked me) introduced flavors of vanilla, caramel, and rye bread. I had a tough time finding a middle, while the back featured oak and raisin.

Finish:  The 105° wasn't shy; it warmed both my hard palate and throat. Caramel and rye spice dominated, while black pepper and charred oak rounded things out. Like the mouthfeel, it started off soft but quickly ramped up, giving it a very long finish.

Bottle, Bar, or Bust:  Heresy is relatively uncomplicated for Rye. The nose was the most interesting aspect of this whiskey. Try as I might I just couldn't find a variety of flavors on the palate, and while 105° is far from unusual for me, it was likely too high for what this whiskey is. It was a shame the French oak was incommunicado, because that may have added another dimension. I'm not suggesting it is a bad pour, it just isn't impressive. Heresy is one you should try at a Bar first before committing to a purchase. Cheers!