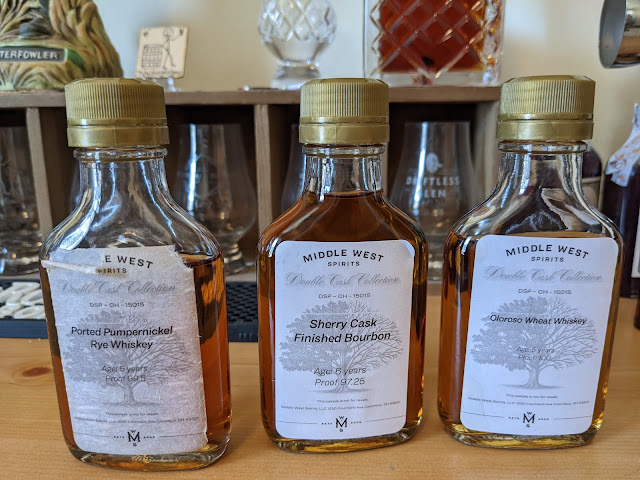 Last April, I had the opportunity to review three whiskeys from Middle West Spirits out of Columbus, Ohio. They consisted of a Pumpernickel Rye, a Wheated Bourbon, and a Straight Wheat whiskey. I was a fan of the Bourbon and Wheat whiskeys but didn’t overly enjoy the Rye.

When Middle West Spirits approached me to review its new Double Cask Collection, it piqued my interest. The goal for the distillery was to take these expressions and marry them with something else to highlight the terroir of both casks used in each expression.

“We were founded in 2008, and opened our distillery for commercial production in 2010. Building on four generations of distilling traditions, we added our own deep experience in marketing and manufacturing, and focused on elevating the distinctive flavors of the Ohio River Valley. Our artisan spirits honor our roots; and reflect our originality as makers, our integrity as producers, and our passion for the craft of producing spirits from grain to glass.” – Middle West Spirits

Before I get started, I’d like to thank Middle West Spirits for providing samples in exchange for my no-strings-attached, honest reviews. Now, let’s #DrinkCurious and learn more.

Up first is the Sherry Cask Finished Bourbon. It started with a mash of sweet yellow corn, Ohio soft winter wheat, and two-row barley, then spent six years in Ohio-sourced heavy-toasted American white oak cooperage before being transferred to sun-blackened Spanish solera sherry butts for finishing. It is packaged at 97.25°, and you can expect to pay about $99.00 for a 750ml bottle. 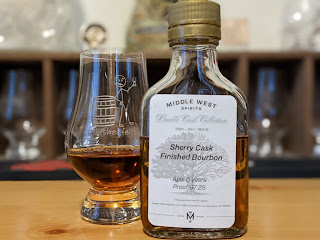 Appearance:  Poured neat in my Glencairn glass, this Bourbon presented as the color of burnt umber. It left a medium rim which generated sticky, slow tears.

Nose:  The sherry influence was evident. Aromas of raisin, chocolate, date, and pipe tobacco tickled my nostrils. Date rolled across my tongue when I took the air into my mouth.

Palate:  A silky, full-bodied mouthfeel led to raisin, plum, and dried apricot on the front. The middle was a blend of chocolate-covered cherries, dates, and nutmeg. Then, I tasted honey, oak, clove, and black pepper on the back.

Bottle, Bar, or Bust:  My first taste made me say, “Wow,” and that didn’t change after my second or third (or fourth). This was a very impressive Bourbon with a ton of flavor. To me, it is a great way to start the adventure of the Double Cask Collection and earned every bit of my Bottle recommendation.

Second up is Ported Pumpernickel Rye. If you’re like me, when you see “Pumpernickel Rye,” you wonder if anyone else has done that. There are a couple; it just isn’t widely used. Made from a mash of dark pumpernickel rye, sweet yellow corn, Ohio soft winter wheat, and two-row barley, the distillate aged six years in new, charred American white oak barrels. The finishing barrels were French Tawny Port casks. It is packaged at 99.5°, and you can expect to pay about $99.00 for a 750ml bottle.  On a side note, my whiskey sample leaked in transit, and the label was damaged. 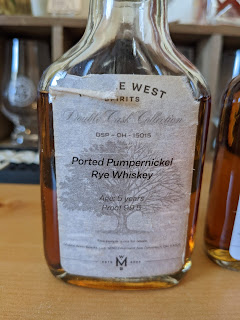 Appearance:  Served neat in my Glencairn glass, this whiskey featured a red mahogany color. It formed a thin rim and sticky droplets.

Nose:  The first thing I smelled was leather, followed by old oak, plum, and dried cherry. Overall, the nose was very understated. When I pulled the vapor in my mouth, I tasted plum.

Palate:  An oily, dry mouthfeel led to nutmeg, cherry, and vanilla on front. I listed nutmeg first because that was the most potent flavor. As it approached the middle, a combination of chocolate and pumpernickel bread gave way to leather, dry oak, and cinnamon on the back.

Bottle, Bar, or Bust:  As I stated in my introduction, I wasn’t a fan of the Pumpernickel Rye. I can safely say that a few more years in wood combined with the tawny port changed my mind. Like the original, there were no bold flavors, but in this case, it worked well, and I enjoyed it.  Would I pay $99.00 for it? I’m not entirely convinced. Were it $30.00 less, I’d jump all over this. For now, I’m granting a Bar rating.

The final entry is the Oloroso Wheat Whiskey. Made from a mash of Ohio-grown red soft winter wheat, the distillate aged five years in new, charred American white oak barrels. The finishing barrels were Oloroso sherry butts. It is packaged at 100°, and you can expect to pay about $99.00 for a 750ml bottle. 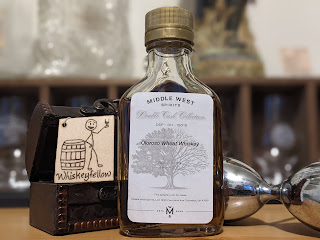 Appearance:  Drank neat from my Glencairn glass, this wheat whiskey was a dark, brassy amber. It created a medium rim that made thick, syrupy legs.

Nose: The first thing that I smelled was pecan and roasted almond. It started before I got the glass anywhere near my face. Stone fruits aromas such as cherry and plum were also present. Finally, dark chocolate made a brief appearance. When I drew the air through my lips, vanilla crossed my mouth with slight, bitter oak.

Palate: The mouthfeel was creamy. The first sip was unpleasant, but as I always say, never judge anything on that first one. That was proven true as the second was more (pardon the pun) palatable. I found roasted coffee, dark chocolate, and vanilla on the front. The middle featured cocoa powder and nutmeg, while the back had dry oak, clove, and roasted almond flavors.

Bottle, Bar, or Bust:  I understand what Middle West Spirits wanted to accomplish here, and I commend it. It may have been the most unusual wheat whiskey that I’ve come across. It was flavorful and quite pleasant. Saying that this one isn’t worth $99.00 to me, and that equals a Bar rating.