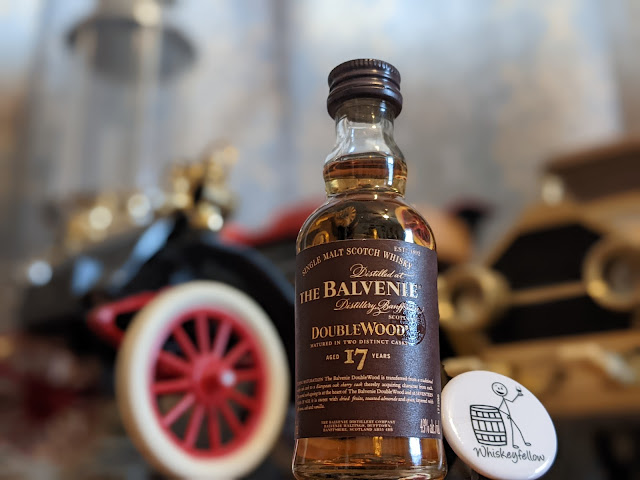 About a decade ago, The Balvenie wanted to honor the 50th anniversary of its Malt Master, David Stewart.  If you’ve not heard of him, he is an amazing man. He started in the business in 1962 at only 17 years old, and it took a dozen years of intense training for him to achieve the status of Malt Master.

“Only after I started to interpret the smell of whisky correctly, I reached the decisive turning point. From there, I began to understand how whisky is made, how it matures, how it develops, and what different qualities all Scottish malts have.” – David Stewart

Okay, shrug, spending 50 years at a distillery and becoming a Malt Master shows dedication, but did Stewart really accomplish something special?  Yes, he did.

Taking whisky matured in one cask, then transferring it to another for further aging, is nothing new. We refer to it as finishing. The process has been successfully used since 1980 when Stewart invented it.  Without that achievement, the Wonderful World of Whiskey would look (and taste) far differently today!

And that brings us back to this Speyside distillery’s celebration of Stewart’s colossal impact on the industry and for its owner, William Grant & Sons. To do that, The Balvenie chose to have its treasured 12-Year Doublewood single malt Scotch mature a little longer in those former Bourbon barrels… 17 years total, to be exact. It was transferred to rest up to a year in ex-Sherry butts, then dumped and packaged at 43% ABV (86°). It is non-chill filtered and naturally colored.

We’ll talk about the result in my tasting notes. Before I do, I should mention that in 2021, The Balvenie chose to discontinue the 17-Year Doublewood. That’s driven the price up from the suggested $129.99 to, on average, $179.99 (per winesearcher.com).

I managed to find a 50ml taster at some random liquor store; I don’t even remember which state. I have to admit I’m excited to #DrinkCurious, so let’s get to it.

Appearance:  Poured neat in my Glencairn glass, this Scotch took the color of orange amber. The American whiskey drinker may expect this to be darker. Keep in mind the cooperage is used; most of the coloring qualities have already been sucked out of the wood. A full-weighted rim seemed uninterested in releasing its legs. Instead, they formed sticky droplets.

Nose: Deep aromas of raisin, dried apricot, and black cherry slammed my olfactory sense. Vanilla, brown sugar, and honey followed. But wait, there’s more! Underneath all of that, yet unmuted, was fresh banana bread. Waves of vanilla and honey rolled across my tongue as I pulled the air into my mouth.

Finish:  Shorter than I wanted it to be, the finish was tannin-heavy and included dark chocolate, brown sugar, and graham cracker.

Bottle, Bar, or Bust:  I would find it difficult to believe any distillery would choose to honor a 50-year veteran with anything less than something stupendous. The Balvenie didn’t disappoint. Honestly, the only thing I could nitpick over was the shorter finish. Would I pay $129.99 for it? Yes. Would I pay $179.99 for it? Also, yes. The 17-Year Doublewood earned every iota of my Bottle rating. Seek it out. Buy it. Cheers!