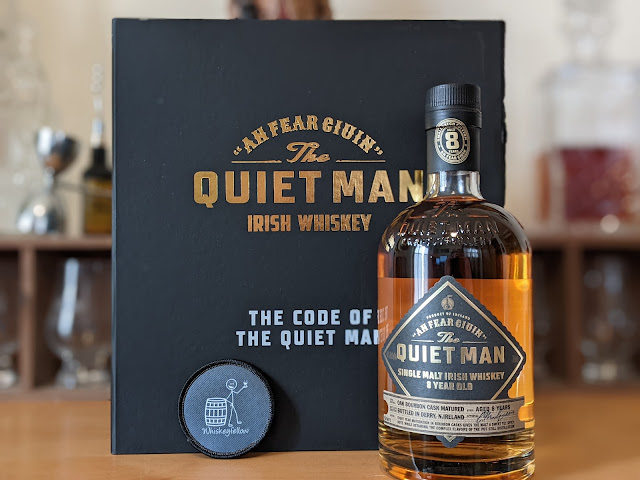 Beannachtaí na Féile Padraig Ort! The traditional Irish blessing translates as “Blessings of Patrick’s Festival Upon You.”  Today is St. Patrick’s Day, and I can find no better way to commemorate it than to review a new-to-me Irish whiskey.

Before I get there, though, what exactly is Irish whiskey? First and foremost, it must be a complete product of Ireland, distilled from a mash of malted cereals with or without unmalted grains. It must be fermented with yeast and distilled at less than 94.8% ABV. Here’s a tricky part: when distilled, it must have an aroma and taste of the representative grains, with no additives other than water and caramel coloring. It must age at least three years in 700 or fewer liter oak containers.

The Quiet Man is a venture of US-based Luxco and Niche Drinks of County Derby in Northern Ireland. The whiskey enjoyed distribution throughout Europe before making its US debut in 2016. There were talks of building a distillery in County Derry, but those fell by the wayside in 2018. Regardless, the brand is going strong today, but the actual distiller remains undisclosed.

“Now that I am making my own whiskey, I am naming it after my father. As a bartender, he saw a lot of things and heard a lot of stories, but like all good bartenders, he was true to his code and told no tales. My father, John Mulgrew, ‘The Quiet Man’, or as they say in Ireland ‘An Fear Ciuin.’” – Ciaran Mulgrew, founder of The Quiet Man

The Quiet Man is available in two versions: a blended Irish whiskey and an 8-year Irish single malt. I’m sipping on the latter. Like most Irish whiskey, it is triple-distilled in copper pot stills from a 100% malted barley mash. It is then aged in first-fill former Bourbon barrels for at least eight years and bottled at 40% ABV (80°) with a retail price between $42.99 and $49.99.

Before I go further, I’d like to thank Luxco for sending me a sample of The Quiet Man in exchange for a no-strings-attached, honest review. Now it is time to #DrinkCurious and learn what this whiskey is all about.

Appearance: Sipped neat in a Glencairn glass, The Quiet Man was brilliant gold. It formed a bold rim with husky, fast legs that crashed back to the pool of whiskey.

Nose: A floral fragrance accompanied by caramel, honey, citrus, and lightly-toasted oak. When I drew the aroma into my mouth, citrus and vanilla tangoed across my tongue.

Palate:  A full-bodied, somewhat creamy mouthfeel greeted my palate. The front featured banana, apricot, apple, and vanilla, while the middle offered nutmeg and orange zest. Clove, cinnamon, coffee, and oak comprised the back.

Finish:  Flavors of oak spice, coffee, and clove were joined by apricot and orange zest. The finish was long and lingering, and I was admittedly taken aback that something at 40% ABV could make my hard palate tingle.

Bottle, Bar, or Bust:  An eight-year Irish single malt whiskey for $42.99 sounds like a heck of a deal if it is enjoyable. The Quiet Man may tell no secrets, but the whiskey named for him is full of flavor and character. I savored it, and I believe you will, too. The Quiet Man 8-Year Single Malt has earned every bit of my Bottle rating. Cheers!