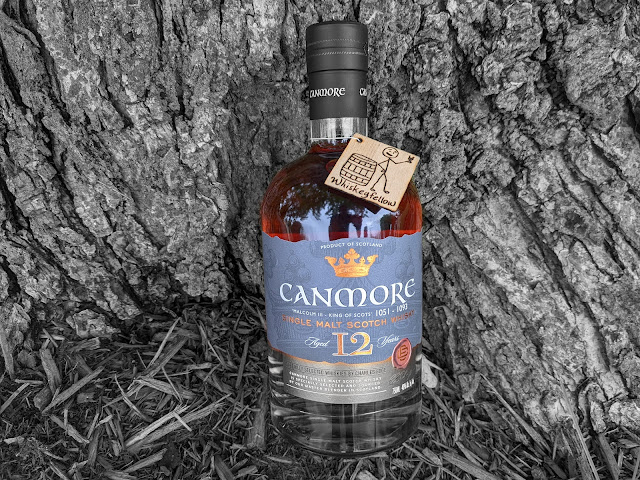 Back in 1058, there was a Scottish king named Malcolm. He was referred to as “Great Chief,” or Canmore, by his people. He was bold and ambitious, constantly proving his strength and leadership while he sought to expand his territory. His reign was the first in a line of rulers that lasted about 200 years. The House of Canmore was well-respected, but the dynasty ended at the death of Alexander III and only because he had no heir.

Canmore 12 is sourced from an undisclosed Highland distillery and aged a dozen years in former Bourbon barrels. Packaged at 40% ABV (80°), you can expect to acquire a 750ml bottle for around $49.99. That’s about in line with many other 12-year single malts.

How’s Canmore 12 taste? The only way to answer that is to #DrinkCurious, but before I do, I must thank Charles Edge London for providing a sample in exchange for a no-strings-attached, honest review.  Let’s do this!

Appearance: Served neat in my Glencairn glass, this whisky was bronze. It formed a medium rim that glued itself to the wall, and only after some patience did it release slow, very slow, sticky droplets.

Nose:  Canmore was one of those whiskies that you can smell from across the room. I know this because Mrs. Whiskeyfellow said, “Wow, that’s fragrant,” yet I was sitting about six feet from her. Raisin, dried apricot, overripe apple, oak, and a mushroom cloud of orange peel rose from the glass. When I took the air into my mouth, it was still all orange peel.

Palate:  The mouthfeel was medium-bodied and offered an oily texture. The front of my palate found a mass of orange peel, raisin, and green grape, while the middle featured an earthy quality, joined by nutmeg and vanilla. Then, I tasted chocolate, cinnamon, and oak on the back.

Finish:  The duration was medium-to-long, with orange, cinnamon, nutmeg, oak, and rich fudge.

Bottle, Bar, or Bust:  Canmore 12 is a decidedly different Scotch. I’ve had single malts that smell and taste of sherry without the use of any sherry casks. The orange notes dominated nearly everything except the finish. For whatever reason, the fudge at the very end cleansed the experience from that heavy orange citrus. While I enjoy orange, I had difficulty discerning the rest of what this whisky offered. I’d prefer it was less so, and because of that, I’m giving this Scotch a Bar rating. Cheers!