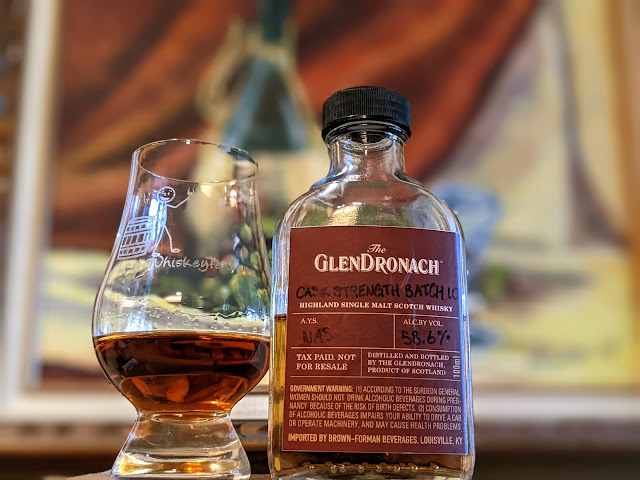 One of Scotland’s oldest legal distilleries is in the Valley of the Forgue. In 1826, The GlenDronach was founded by James Allardice,  and about 45 years later, it was the largest duty-paying distillery in the Scottish Highlands. Fast-forward to 1996, and The GlenDroanch was mothballed until 2002.

The GlenDronach was one of the last distilleries to utilize coal-fired stills, and in 2005, it was converted to steam heating. Then, in 2016, Brown-Forman purchased the distillery, along with Glenglassaugh and BenRiach, forming the company’s Scotch whisky footprint.

The GlenDronach Cask Strength Batch 10 is a Highland Single Malt aged in both Pedro Ximénez and Oloroso sherry casks. It is non-chill filtered, naturally colored, and carries no age statement. You’ll find a 750ml package for about $99.99 and available across the United States.

“The GlenDronach Cask Strength Batch 10 is incredibly rich and full-bodied with the full depth of sherry cask maturation at its heart. Presented at natural cask strength, it offers a cornucopia of flavor, from richly spiced fruitcake to dark cherry and ginger jam. The limited release showcases the distillery’s crafting the most exceptional, richly sherried Single Malts, representative of The GlenDronach’s rare dedication to its craft, embodied in every expression.” – Dr. Rachel Barrie, Master Blender

I’m ready to #DrinkCurious, but before I do, I thank The GlenDronach for a sample of this Scotch in exchange for a no-strings-attached, honest review.

Appearance: Poured neat in my Glencairn glass, this Highland Scotch presented as burnt umber. A medium-weight rim created no legs; instead, it was tiny droplets glued to the wall.

Nose: Have you ever had an excellent rum-soaked fruitcake? Not the garbage passed around from family member to family member as if it was a white elephant gift, but the stuff you fight over and eat immediately. My memory was triggered as I smelled what was inside the glass. I also found apricot, citrus, nougat, and leather. When I drew the air past my lips, the rummy part of the fruitcake was more pronounced.

Palate:  The mouthfeel was silky and full-bodied. Raisin, cherry, and peach exploded in the front of my mouth, while roasted almond, orange peel, and mocha formed the middle. The back offered old leather, oak tannin, and ginger.

Finish:  My mind did a double-take at this point. Wasn’t this over 117°? You’d never know it because there was no burn in my mouth or throat whatsoever. Instead, there was a caress of raisin, cherry, honey, ginger, and oak. It was lengthy and left me with a smile.

Bottle, Bar, or Bust:  Sure, there’s no age statement, but who cares? This is a cask-strength sherry bomb of a Scotch that is affordable, approachable, and amazing. Nothing would cause me to second guess buying a Bottle. It would be well worth it. Cheers!