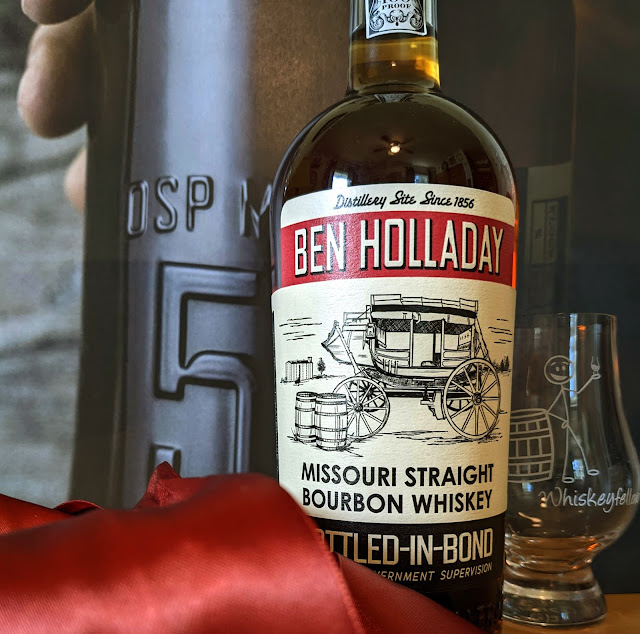 How many distilleries are you aware of that can trace their history back to Lewis and Clark? They didn’t found the distillery, but the duo is credited with discovering the limestone spring in what would be Weston, Missouri in 1804. Two brothers, Ben Holladay and Major David Holladay, decided that the spring would become the site for a distillery.

Holladay… Holladay… why does that name ring a bell? Perhaps you’ve heard of Wells Fargo. Ben was the founder of Wells Fargo Express, he was known as the Stagecoach King, transporting folks from Missouri to the West Coast and points in between. Ben had his hands in several companies, and by 1864, he was the largest individual employer in the nation!

It was in 1856 that the Holladays founded their distillery. It was known as Blue Springs Distillery, but as often happens in American distilling, it changed hands several times - first to George Shawhan, whose family named it the Shawhan Distillery in 1900. It changed in 1936 and was called the Old Weston Distillery before becoming McCormick Distilling Company in 1942. In 1993, the business was purchased by Ed Pechar and Mike Griesser.

Today I’m exploring Ben Holladay Bottled-in-Bond Bourbon. A few exciting things are going on. First, Bonded whiskeys are some of my favorites. They differ from any other kind of whiskey in a handful of ways. Perhaps the most significant impact that many gloss over is the whiskey must be distilled during a single distilling season. That means, while you can blend barrels, all the barrels in the batch must be from the same season (January to June or July to December). That precludes a distillery from mixing barrels of various ages. In the case of Ben Holladay, it was distilled during Spring 2016 and bottled during Spring 2022.

A Bonded whiskey also must be at least four years old. If you’re a math guru, you can tell this Bourbon is aged six years. The mashbill is undisclosed, but the other thing about Bonded whiskey is it must always be bottled at 50% ABV (100°). The market for Ben Holladay is currently limited to Missouri and Kansas with a retail price of $59.99.

One last interesting factoid before I get to the tasting notes is the barrels originated from Warehouse C, with 21% coming from the first floor and 79% from the fifth of a seven-story warehouse, and the Bourbon is non-chill filtered. I do appreciate the transparency from Holladay – to me; it is always fascinating to have that.

I must thank Holladay Distillery for providing me a sample of Ben Holladay Bottled-in-Bond in exchange for a no-strings-attached, honest review. Let’s #DrinkCurious and taste what it is all about.

Appearance: Served neat in my Glencairn glass, this Bourbon was a dark, deep orange amber. A thick rim clung to the wall, which eventually collapsed under its weight with fat, slow legs.

Nose: I found this whiskey very corn forward on the nose. Hidden beneath was a dash of mint, suggesting to me this is a rye (versus wheat) Bourbon. Cherry, plum, orange peel, and toasted oak rounded out the aroma. I tasted chocolate and orange peel when I pulled the air through my lips.

Palate:  A lighter-than-anticipated weight possessed an oily feel to it. The front of my palate found coffee and caramel. The middle featured dark chocolate, vanilla, and corn, while the back had flavors of bold oak, smoke (from the char), and white pepper.

Bottle, Bar, or Bust:  I may say something that will make you angry, and for that, I apologize. As we pass the halfway point of 2022, it is time to start considering the cream of the crop. Ben Holladay Bottled-in-Bond Bourbon is one of the best – if not the best – Bourbon I’ve tasted year-to-date. There’s nothing not to love here. Even the price is attractive. So, why is that upsetting? Well, it means you’ll have to travel to or have a friend in Kansas or Missouri to snag a Bottle. Travel. Make new friends. Trust me. Cheers!